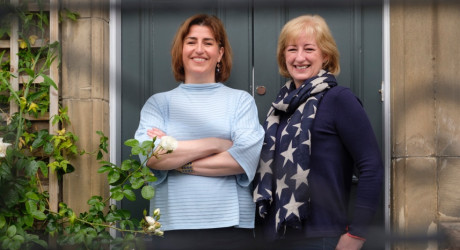 A NEW business has been launched in Edinburgh with the aim of inspiring audiences and driving tangible changes in communities and society.

Speaker Buzz, which exists to promote speakers who have genuine human-interest stories that inspire and motivate others, is being launched by two Scottish sisters with well-established careers in the communications and technology sectors.

Located in Edinburgh, and operating across the UK and internationally, Speaker Buzz is the brainchild of Debbie Byers, who has worked in the communications industry for more than two decades, and Carol Graham, who enjoyed an almost 20-year career with the global technology giant, IBM.

Speaker Buzz will specialise in promoting people who want to make a positive social, culture or behavioural change in society, while also focusing on health and wellbeing.

It will represent individuals who have achieved something extraordinary and who are changing people’s attitudes and lives – giving Speaker Buzz its tag line: ‘inspiration with impact’. It is actively targeting organisations interested in developing the minds and emotions of its workforce, clients, delegates, members or students.

Debbie Byers, Speaker Buzz director, said: “Having been fortunate enough to have listened to hundreds of motivational speakers during my PR career, I was more and more conscious of the difference between the truly inspirational speakers, who motivated me to take action and change things around me, and those who are often just going through the motions to pick up their fee. Carol and I wanted to create a place that is exclusively for those in the former category, which is why we have launched Speaker Buzz to showcase the passion and talent of some truly extraordinary people.

“Speaker Buzz also recognises that employers increasingly understand that the wellbeing of individuals is of huge importance in the modern world in which we operate. The corporate world is now much more aware and thoughtful about the needs of its workforce, but more can always be done. People need to look after the mental and emotional wellbeing of their employees if they want to grow their businesses in a sustainable way.”

Speaker Buzz has already signed up a number of clients to be ready for its launch. Clients include:

* Mollie Hughes, who in May 2017 became the youngest woman (aged 26) in the world to summit Mount Everest from both the south and north sides;

* Alister Gray, the founder of Mindful Talent – a global leadership coaching organisation using mindfulness and meditation to cause a positive behavioural change; and

Mountaineer and motivational speaker, Mollie Hughes said: “Being lucky enough to travel to some of the world’s most remote and exciting environments, I’m keen to share my experiences and insights with others in the hope that I can inspire people in their own lives.

“I want to show people that they can achieve absolutely anything with the right mix of determination, self-belief and team work. I’m also interested in how controlling fear and resilience can play an integral part in all of our lives – whether that be on a business or a personal level.

“I love giving talks to diverse audiences and seeing the impact this can have on people of all ages and from all backgrounds. I recently gave a TED Talk during the TEDx Youth conference in Glasgow and a two-day workshop for a business in Barcelona and was heartened by the feedback I received.

“Working with Debbie and Carol at Speaker Buzz is opening up new doors to me to deliver talks across the world and is giving me the chance to touch the lives of more people than ever before.”

Debbie Byers will continue to run her successful Edinburgh-based PR agency, Beeline PR, alongside Speaker Buzz, while Carol Graham, who was awarded the prestigious ‘Best of IBM’ award in 2017 for her achievements and contributions, has chosen to leave the industry to focus exclusively on launching and growing Speaker Buzz with her sister.

Speaker Buzz is based in the ‘Spaces’ office development in Lochrin Square in Edinburgh’s main business district.

Debbie has spent more than two decades working in the communications industry sharing stories of achievement, as well as managing consumer brand and corporate communications campaigns.

She also runs a successful PR agency in Edinburgh called Beeline PR and is the former Scotland chair of the industry body, The Chartered Institute of Public Relations (CIPR).

Carol enjoyed an almost 20-year career with the global technology company, IBM, where the focus was on finding the right solutions for customers to build smarter businesses.

Having seen the benefits of a more positive lifestyle outside of the corporate world, Carol chose to leave the industry and has joined her sister to form Speaker Buzz.

MEDIA RELEASE issued by Speaker Buzz. You too can share your stories (aka press or media releases), on this site. Email here for more information.