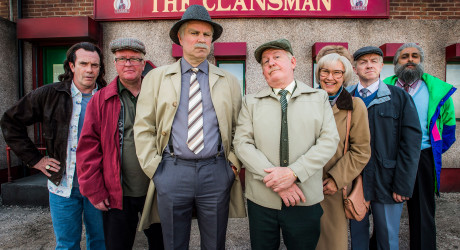 ICONIC BBC One comedy, Still Game, produced by BBC Studios, will return for a ninth and final series later this year as pensioner pals Jack and Victor go in to comedy retirement.

Filming gets underway at BBC Scotland’s Dumbarton Studios and around Glasgow next month in what promises to be a ‘must-see’ finale for fans across the country.

Greg Hemphill, who plays Victor McDade, says: “Still Game is a story 21 years in the making. We’ve had an amazing run but one of our hopes when we brought the show back was that we would get the opportunity to finish Jack, Victor and the gang’s journey. We feel that time is upon us. We hope you will join us later in the year to see how the story ends!”

Ford Kiernan, who plays Jack Jarvis, adds: “I can’t believe 21 years have passed in what, for us, has been an outstanding experience of collaboration, storytelling and performing. But, above all, being fortunate to entertain people and make them smile. So when the last episode airs we hope your memories of our little gang will be fond ones.”

Shane Allen, controller, Comedy Commissioning, celebrates Still Game’s comedy achievements: “Ford and Greg have achieved that rare beauty of making a modern classic sitcom that has made millions laugh and will be enjoyed for decades to come. This new series is another riot of rich character based comedy and see’s all our old pals from Craiglang off in style.”

Steve Carson, BBC Scotland’s head of Multiplatform Commissioning, adds: “Still Game is a once-in-a-generation comedy that attracts audiences of all ages. Jack, Victor and the gang at the Clansman have made millions laugh by growing old disgracefully and we’re going to miss them when this fantastic new series concludes.”

The ninth series of Still Game will be executive produced by Steven Canny for BBC Studios and Gregor Sharp is the commissioning editor for BBC Comedy. The series is produced by Jacqueline Sinclair and directed by long-term Still Game collaborator, Michael Hines.

Since making its TV debut in 2002, Still Game has become a comedy phenomenon. When it returned in 2016 after a nine year hiatus, it became the most-watched TV programme in over a decade in Scotland attracting more than half of the viewing audience.

Still Game highlights the BBC’s continued commitment to production made in Scotland for UK-wide audiences including productions like Two Doors Down, Shetland, The Cry and The Victim.