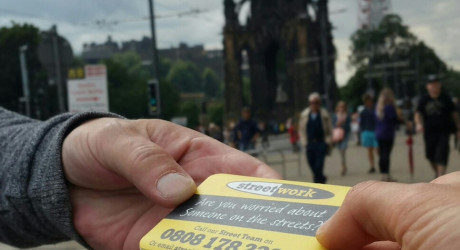 ROUGH sleepers in Edinburgh are being handed portable mobile phone battery chargers, to help ensure their phone is sufficiently powered up for what could be a lifesaving call to a support service.

The Edinburgh-based homelessness charity, Streetwork, has identified a relatively high level of mobile phone ownership among rough sleepers in the city, but no easy way of being able to charge them, when their battery power begins to run down.

So, it has commissioned powerpacks that can be handed out by its street team with the packs printed with vital contact telephone numbers, including its own, in case of emergency.

Spent powerpacks are collected by street team members, in return for fully-charged ones.

Says Hugh Hill, director of Streetwork: “For most of us, our phone is a crucial connection to our family, friends and the outside world.

“If you’re on the street, it’s more important than that; your phone is a lifeline, security and, in some cases, it’s your only means of help.”

Many people who are rough sleepers find it difficult to charge their phone in the way most people would when out shopping or visiting cafes or restaurants.

Adds Hill: “Our focus is always about getting people off the streets but, where that’s not possible, we want people to be safe – which is why we’re planning to issue portable phone chargers to people on the street.”

“Our street team are out everyday in Edinburgh and Leith connecting with people sleeping or begging on the streets.

“In one day, in June, we spoke to 89 people begging in the city. We know people are having a tough time and we’re helping people get the right support and treatment they need. Being able to keep in touch by phone is a huge benefit.

“There’s nothing good about being on the street. It’s bad for your mental and physical health, it’s unsafe and your chances of assault, theft and exploitation are huge.”

Edinburgh-based charity, Streetwork, operates out of two premises in Edinburgh, on South Bridge (offices) and on Holyrood Road (a support and amenities hub for people who are homeless).

It is a sister organisation of Glasgow-based charity, Simon Community Scotland.

Founded in 1991, Streetwork’s street outreach team is regularly joined by the likes of GPs and vets, to provide practical assistance to people sleeping rough (and any pets they might have).

MEDIA RELEASE issued by Streetwork. You too can share your stories (aka press or media releases), on this site. Email here for more information.