Media release: Glasgow, as seen through the eyes of artists 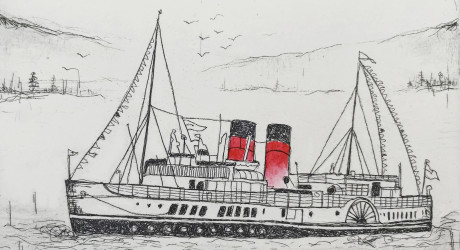 GLASGOW Print Studio presents an exhibition of Glasgow seen and imagined through the varied media of printmaking.

For this show, an invited group of print studio members have created new works using the city itself as a subject matter. For some, this sits quite consistently with their typical process but for others it was a less familiar brief.

Their resulting works represent an informal series of reflections on Glasgow through a range of technical approaches.

GPS gallery manager, James Murphy, said: “It’s been fascinating to see how the artists have responded. For some, the subject matter sits quite consistently with their typical process but for others it was a less familiar brief. The artists were chosen in part with this in mind.

“The exhibition will also help to enrich our retail offer, with works in edition (and unsold unique works) being added to gallery stock when the show closes.”

Wishing to avoid showing only highly representative images of recognisable Glasgow structures and landmarks, interpretations range along a scale of literalness and there are images that do not immediately give up their reference points. In addition, alongside works whose focus is wide and analytical, there are also personal stories, whimsical reflections and even influences from other cities woven in to the show as a whole.

Those taking the more literal approach include Harry Magee and Fiona Watson. Fiona Watson has created beautifully executed etchings of the Clyde and the Victorian glass houses of the Botanic Gardens. Magee’s images feature well-known landmarks such as the Finnieston Crane, the Clyde Auditorium (affectionately known as the ‘Armadillo’) Kelvingrove Art Gallery and the domes of the City Chambers.

For Gregor Smith the constant destruction (demolition) and construction visible around the city gave rise to the work, ‘Structure and Rain’, based on an experience one dark, wet and windy night last winter at the site of the former goods yard on High Street. The work, ‘Changing Times’, is based on buildings on Nicholas Street and Argyle Street.

Rachel Duckhouse’s abstracted etchings of the Sheriff Court and the St Enoch Centre are concerned with the form of the buildings and their impact on the visual environment that form part of the artist’s daily commute.

Murray Robertson’s ‘Mungotaur’ is a response to the poem of the same name by Jim Carruth, Glasgow’s poet laureate  since 2014. ‘The Mungotaur’ transposes the Greek myth of the Minotaur to a series of poems centred on the Glasgow Subway system with each of the 15 stations represented by a verse reflecting the stories of people, their histories and their destinations.

This exhibition has been scheduled to coincide with the European Championships 2018 taking place across the city from the 2nd until 12th of August.

MEDIA RELEASE issued by Glasgow Print Studio. You too can share your stories (aka press or media releases), on this site. Email here for more information.