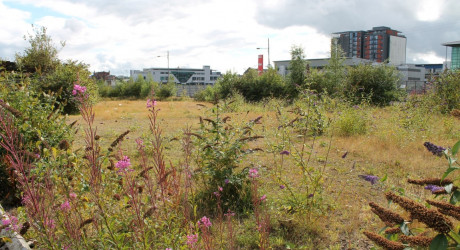 A NEW Compulsory Sales Order (CSO) power could tackle the blight of abandoned buildings and parcels of vacant and derelict land in town centres and communities across Scotland, according to a report published today by the Scottish Land Commission.

The proposed new power would provide planning authorities with a straightforward mechanism to bring sites and buildings that have been unoccupied and/or derelict for an undue period of time, back into productive use.

Data* from the Scottish Government shows that there are around 11,600 hectares of vacant and/or derelict land in Scotland – an area almost twice the size of the City of Dundee. This is an entrenched problem and the headline figures have not changed substantially since the late 1990s.  In addition, Shelter Scotland claim there are more than 37,000 long-term empty homes in the country**.

Speaking about the problem, Professor David Adams, one of the Scottish Land Commission’s five commissioners, said that vacant and derelict land and buildings present challenges for many communities across Scotland.  He said: “Such sites often act as magnets for crime and anti-social behaviour.  This damages quality of life for existing residents and can act as a deterrent for inward investment, making it more difficult to bring about long-term regeneration and renewal.”

Communities and local authorities already have a number of policy instruments – including compulsory purchase orders – that can be used to help regeneration. However, these policies require a clear plan in place as to how the land or building in question would be used. In many cases, public authorities and communities do not have a specific end use in mind for problematic sites but simply wish to see them used for some productive purpose.

Speaking about the proposed new power, David continues: “CSOs could be part of a tool kit to bring unused land – especially small parcels of land that have lain unused and unloved, in our city and town centres – back in to productive use.

“We envisage it being used as a power of last resort; councils and land owners should be working together to try and find solutions first.”

The Land Commission worked with interested parties across Scotland, including councils, the RICS, Shelter and experts in urban renewal and regeneration to develop the proposed new power.

Illustrative examples of the types of sites that might be tackled using the new power are detailed in the report and include sites such as empty homes, abandoned shopping centres, derelict hotels, gap sites, abandoned or derelict commercial buildings. The examples described are all real life examples from different communities around Scotland.

In a small town in rural Perthshire, there is a former hotel in the town centre that has been abandoned for several years. Having been neglected for an extended period, the building has become an eyesore and is now posing a danger to the public. Building standards notices have been issued to the owner but as the owner is a company it has been difficult to establish contact and no remedial action has been taken.

Although recent right to buy legislation would provide a potential route for bringing this site back into productive use, restoring the site would be complex and technically challenging and there is not currently any appetite within the community to take on the project. Similarly, resource constraints mean that, unless and until the physical condition of the building deteriorates to such an extent that it becomes a serious danger to public health, it is unlikely that the local authority would pursue a compulsory purchase action. There is therefore currently no realistic prospect of the site being brought back into productive use.

There is an area of land in suburban settlement which has been abandoned and neglected for several years. Planning permission was granted a few years ago; however, nothing has been done with the site. The site is badly neglected, covered with litter and contains overgrown trees, which are blocking out the light for nearby residents. This is having a negative impact on the wellbeing of the community and compromising the quality of life of nearby residents.

There is no particular aspiration within the community to take ownership of the site but there is a strong desire for action to be taken to improve its physical appearance. A CSO could therefore be an effective tool for improving the site and bringing it back into productive use in the interest of the public.

In this case the preliminary investigations could help identify what the current barriers are that are preventing the site from being brought back into productive use. It is possible that this alone could help to bring about a mutually acceptable resolution but if that was not possible then ultimately a CSO could result in a transfer of ownership to a more active and responsible owner.

MEDIA RELEASE issued by Pagoda PR. You too can share your stories (aka press or media releases), on this site. Email here for more information.