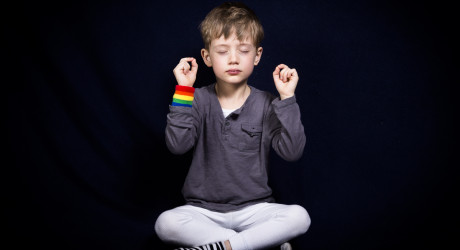 A MOTHER diagnosed with a life-changing chronic condition that left her and her two-a-half-year-old son struggling with anxiety has launched a crowdfunding campaign to build a new digital platform for pre-schoolers to learn the skills that transformed their lives. (1)

The crowdfund aims to raise at least £7,000 to grow Wee Seeds, (2) a mission-led venture designed to plant the seeds of mindfulness and meditation in pre-schoolers, by funding the build of a new web-based app.

It runs until next Thursday (December 13th) – https://chuffed.org/project/growing-wee-seeds

The fundraising bid comes after a prototype was successfully received by parents and children earlier this summer. 75 per cent of participating parents noticed a positive difference in their children – and themselves – after using the mindfulness and meditation-based games. (3)

Wee Seeds founder, Christina Cran, was rushed to hospital in 2015 after being diagnosed with the auto-immune condition, Type 1 diabetes, requiring the application of insulin.

Initially, this life-changing diagnosis left her very unwell, struggling to work and look after her son, Fin, who was then two-and-a-half.

It also had an impact on her mental and emotional wellbeing, and so, realising she had to help herself, she downloaded a meditation app she’d spotted. Within a month, she could feel the positive impact.

Edinburgh-based Christina said: “After just weeks of daily meditation, I’d noticed a real shift in me – but then Fin started struggling, asking if ‘mummy was going to die?’, or ‘be taken to hospital again?’, clinging to me all the time.

“Knowing how much childhood experiences can affect your entire life, I wanted to help him overcome the fear and anxiety he was showing but didn’t know how. When I looked for something to help teach him some of the things I was learning I could find nothing for his age group.”

So, she started to think of fun ways to self-teach him some of the breathing and mindfulness techniques she was learning. He soon began to get over the anxiety around his mum’s health and has gone onto use his skills to learn to focus on tasks, and deal with tricky emotions, for example the transition to school. He even enjoys the occasional morning meditation with his mum.

Christina added: “I realised so many children could benefit from learning how to cultivate focus, attention, calm and kindness, and in turn how this could help them with their emotional literacy, inner resilience and nurture positive mental wellbeing – and so the idea for Wee Seeds was sown.”

Meditation and mindfulness are now widely used in schools, universities and workplaces – but Wee Seeds exists to bring this to early years children. Early intervention changes lives, as 50 per cent of all mental health problems are established by the age of 14. (4)

Christina added: “The money raised from the crowdfunding campaign would enable us to design and build the first public version of Wee Seeds, a digital platform housing a range of games and exercises for parents, teachers and carers to use with the children they care for to help start to teach them livelong skills for the 21st century.”

The new version of Wee Seeds will work on a socially conscious Buy One, Give One Away model – meaning subscribers would pay it forward, thereby allowing Wee Seeds to work in partnership with charities to donate free subscriptions to children and families that might benefit from Wee Seeds exercises.

Seed funding was used to build the Wee Seeds prototype, with Christina’s vision for the app being brought to life by Scottish designer, Emma Chapman, who also worked on early designs for leading meditation app Headspace, and a student from Edinburgh Napier University’s School of Computing.

The exercises were designed in conjunction with mindfulness and meditation expert, Dr Vee Freir, Consultant Clinical Psychologist and co-ordinator for the NHS Mindfulness Project. Dr Freir was one of the people who has worked to ensure that mindfulness is available throughout the NHS in Scotland.

Dr Freir said: “Mindfulness is a wonderful tool and making it available for this young age group will, hopefully, create resilience and help children to remain mentally healthy for the rest of their lives. It has been a joy to work alongside Christina, enabling her to bring this project to life.”

As well as its plans to build fun, inspiring and practical tools for parents and carers, Wee Seeds is also spearheading a research programme, working with lecturer, Alexia Barrable, from the University of Dundee, and supported by Dr Karen Goodall from the University of Edinburgh, to test the impact of mindfulness practices on pre-schoolers in nurseries across Scotland.

Christina said: “Research in this area is sparse and we’re keen to address that. We know from studies in America that these types of practices can affect children’s focus, attention, sense of calm and kindness and we want to broaden that research base and look more into the effectiveness of these techniques on pre-schoolers’ wellbeing. We believe this research would be the first of its kind in Scotland.” (5)

Wee Seeds was part of The Good Ideas Academy incubation programme, run by The Melting Pot in Edinburgh, and has received seed-funding from UnLtd.

1. The crowdfunding campaign is being hosted on chuffed.org – and runs from November 22nd to December 13th. Funds raised will be used exclusively to design andmbuild the first version of the Wee Seeds web-based app. https://chuffed.org/project/growing-wee-seeds
2. Wee Seeds exists to give parents and professionals innovative, inspiring and practical tools to plant and nurture the seeds of mindfulness, meditation and movement in pre-schoolers. These will be delivered through the new online platform. Wee Seeds will operate a Buy One, Give One Away model to give free subscriptions to families who need free access. It will robustly research the impact of such activities on pre-schoolers wellbeing.
3. A total of 15 families took part in the Wee Seeds prototype testing during summer 2018. 75 per cent of parents reported a positive difference in their child becoming more ‘calm;, ‘more in control of themselves’, ‘easier to put to bed’ and helping them to ‘focus on the positive’ and ‘control levels of frustration and anger’ and 75 per cent parents reported a difference in themselves, feeling calmer and enjoying spending time with their children.
4. Kessler RC, Berglund P, Demler O, Jin R, Merikangas KR, Walters EE. (2005). Lifetime Prevalence and Age-of-Onset Distributions of DSM-IV Disorders in the National Comorbidity Survey Replication. Archives of General Psychiatry, 62 (6) pp. 593-602. doi:10.1001/archpsyc.62.6.593
5. https://centerhealthyminds.org/assets/files-publications/FlookPromotingDevPsych.pdf

MEDIA RELEASE issued by Cran Communications. You too can share your stories (aka press or media releases), on this site. Email here for more information.