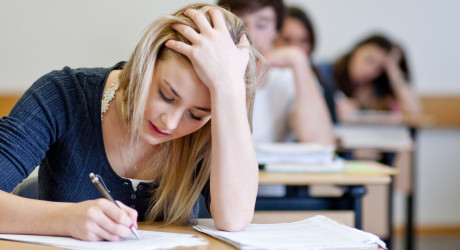 RESEARCH released by Fearless Femme (1) today shows that young female and non-binary students at universities and colleges across the UK have become fearful of the future, owing to mixture of exam stress, career pressures, course workloads and financial debt.

These findings reinforce evidence of a mental health crisis among young women and non-binary people in the UK.

Over the last nine months, Fearless Femme has been carrying out a research programme aimed at examining the causes of mental ill-health for young female and non-binary students. The results of this programme were today published in Fearless Femme’s first research report titled, ‘Fear of the Future? A Research Report on the Mental Health of Young Women and Non-Binary Students’.

The rationale behind focusing on these groups is because young women, non-binary people and students are considered to be at greater risk of mental illness than the general population. (2)

For instance, research by Girlguiding has found that 46 per cent of young women aged 17-21 are affected by mental ill-health (3); the Scottish Trans Alliance has found that 65 per cent of non-binary people have poor mental health due to discrimination (3); and a survey by the National Union of Students revealed that 78 per cent of students have experienced mental health issues at some point in their studies. (4)

Fearless Femme’s research explored what it considers to be an under-researched intersection between mental health, gender and student life.

It was based on a mix of qualitative and quantitative methods, including surveys, polls and in-depth case studies with young female and non-binary people. The report draws on over 1,000 responses from Fearless Femme’s magazine readers, social media followers and volunteer writers and artists based at universities and colleges across the UK.

The research programme explored the mental health journey of young women and non-binary people through the post-secondary educational system – from leaving school, to starting university or college, to life after graduation and transitioning to work.

The research confirmed that there is a crisis in the mental health of young women and non-binary people in higher and further education:

Fearless Femme is campaigning to improve student mental health services both during and after university and college, when many students experience a ‘post-graduation’ dip in their mental health.

Their policy recommendations include more pre-arrival student mental health support, campus-wide wellbeing campaigns and resources to raise the visibility of mental health services, the introduction of flexibilities around exams and assessment for students with mental health conditions, a continuation of institutional support for students in the first 12 months after graduation, and a more honest narrative in universities and colleges about failure and managing expectations.

Fearless Femme is a grassroots mental health magazine, creative community and research hub based in Edinburgh. Its aim to support the mental health of young female and non-binary people has been supported by seed funding from the Scottish Government and European Social Fund. (5)

Fearless Femme focuses on three areas: the production of a digital magazine that showcases the mental health stories and artwork of young female and non-binary people, with a particular focus on ‘surviving university’; an online membership community that welcomes feminists of all genders; and evidence-based research on the mental health of its readers.

Fearless Femme was set up by former university lecturer, social scientist and social entrepreneur, Dr Eve Hepburn, after she lost her step-brother to suicide two years ago, having already suffered a breakdown and mental ill-health after a series of traumatic events, including the sudden death of her boyfriend when she was just a 19 year-old student.

The magazine has attracted over 19,000 readers in 127 countries around the world, and over 230 volunteers have donated their short stories, articles, poems, artwork, and videos reflecting on their mental health experiences, in a bid to help others feel less alone – and they have also taken part in Fearless Femme’s research programme.

Fearless Femme founder and CEO, Dr Eve Hepburn, said: “This research report underlines the importance of mapping the mental health journeys of young adults as they travel through the education system into their first jobs.

“We discovered specific points of stress as people made the transition from school to university/college, and from university/college to employment. We know that universities and colleges are focussed on tackling the growing crisis in student mental health, and we believe focussing on these transitions through tailored support would be of great help.”

She added: “We also found that young female and non-binary students feel so pressured to succeed in all aspects of their academic life that many have become fearful of the future. We hope to work with universities to find a way to change the narrative on failure, and alleviate the pressures that young people face, in order to tackle the mental health crisis among this generation.”

Talat Yaqoob, feminist and equalities campaigner, said: “The report evidences the need to not only tackle stigma surrounding mental ill health, but – crucially – the need for long-term investment in mental health services across universities and colleges to support the growing number of students experiencing poor mental health.

“Universities and colleges have an opportunity to be leaders in this area and create campuses which are not only healthy, but inclusive and which actively tackle sexism and discrimination.”

Katie, a research survey respondent, said: “Give students a realistic view of what to expect. Tell them they may feel overwhelmed, upset, feel helpless and not know what to do with some of the feelings that come up. They are still learning. No-one knows how to do it. Give them the red flags – this is when you need to seek help. Tell them when things are not usual.”

Hannah, a research survey respondent, said: “I would focus on helping students develop positive coping strategies during their time in education so that this was well developed by the time they leave. I would also focus on tackling the stigma that surrounds this area.

“I think many people struggle to ask for help when they find themselves floundering after graduating because there is a focus put on how you are succeeding compared to your peers and where you are supposed to be ‘x’ years post graduation.”

Set up as a social enterprise, the Edinburgh-based mental health organisation runs a skeleton staff, to manage the submissions from a group of voluntary contributors, who all report massive benefits to their own wellbeing from being given a space to talk openly about mental health.

Fearless Femme is a non-profit mental health project, magazine, research hub and creative community empowering feminists of all genders to find a better mental space. The aim of Fearless Femme is to empower young people to overcome stress, anxiety and the challenges that life throws at them. The social enterprise launched in February this year at an event, attended by the Minister for Mental Health, the Principal of The University of Edinburgh, and leaders in the worlds of mental health, equalities and education.
Girlguiding. (2015). Girls’ Attitudes Survey 2015. London: Girlguiding.
Valentine, V. (2015). Non-binary people’s experiences in the UK. Scottish Trans Alliance.
NUS. (2015). Mental Health Poll, Nov 15.
As a social enterprise, Fearless Femme is being funded by the Scottish Government and the European Social Fund to conduct a 12-month pilot project in partnership with the University of Edinburgh on supporting the mental health of young women from 1st January 2018 – 31st December 2018. Fearless Femme was legally incorporated as a Community Interest Company in May 2017, and since commencing operations in January 2018 it has employed a small, part-time team of five staff based in Leith who are working to improve the mental health of young adults.