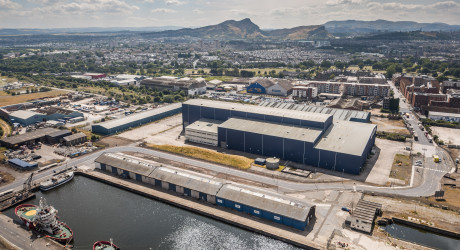 Recently host to Marvel’s Avengers: Infinity War (2017), the ex-industrial building is situated on a private, gated 8.6acre site within the port estate and is owned by Forth Ports Limited.

Offering industry-standard dimensions, it incorporates adaptable interior shooting options across 160,000 sq ft and potential for five sound stages of between 50ft and 100ft in height. In addition, there is 27,000 sq ft of flexible workshop, production and high-end office space; ample backlot provision allowing for significant production set-builds, and is well serviced by vehicle access doors and tech and unit based parking.

The building is conveniently located in Edinburgh, three miles north of the city-centre, is just ten miles from Edinburgh International Airport and a 50-minute drive west along the M8 from Glasgow and within reach of Scotland’s breathtaking locations.

Public transport links also connect it with both Edinburgh and Glasgow, with the development providing parking to accommodate permanent personnel alongside visiting studio productions.

This tender invitation is for organisations to:

* Fund and carry out a refurbishment of the building to provide commercially viable studio facilities. This may be partially funded by state aid compliant funding from Screen Scotland; and

Increasing the range of Scotland’s studio infrastructure to include permanent studio space complementing existing facilities like Wardpark Studios to house the largest film and high-end television productions has the joint objective of supporting the growth of Scotland’s screen production industry and increasing inward investment from international productions.

Scotland offers a strong proposition for growth in the screen sector due to:

* an excellent and growing skills base;

* co-operative public organisations at both national and local levels which help facilitate access to key locations an existing supply chain built up around three national TV broadcasters (BBC, STV and Channel 4); and

Isabel Davis, executive director, Screen Scotland, said: “The enormous potential of 31 Bath Road was demonstrated when it hosted Marvel’s Avengers: Infinity War last year. Its scale, accessibility, proximity to crew and central Edinburgh and its ability to be rapidly adapted make it a highly attractive proposition and one that could swiftly provide a home in Scotland for large0scale productions.

“Screen Scotland is firmly committed to supporting the growth of the screen sector to be a global screen leader.  The site presents a fantastic opportunity to increase Scotland’s screen infrastructure, and capitalise on the unprecedented production boom, which will have a hugely positive impact on our screen sector and the wider economy.”

Fiona Hyslop, Cabinet Secretary for Culture, Tourism and External Affairs, said: “The Scottish Government is focused on strengthening our screen sector and creating the conditions to support continued growth across production, development, talent and skills.

“We have significantly increased our funding for screen this year and supported the launch of Screen Scotland, which brings together public sector support for the industry.

“We welcome the launch of this tender process, which aims to enhance Scotland’s screen infrastructure and give private sector operators an opportunity to invest in Scotland’s growing screen sector.”

Stuart Wallace, chief operating officer from Forth Ports, said: “Our support for Scottish industry does not stop at the quayside and we are thrilled that Screen Scotland has chosen the Port of Leith as the location to expand Scotland’s studio provision. This building has been popular with the creative industry recently with Avengers: Infinity War using 31 Bath Road as a studio space.

“As Scotland’s capital port and a major economic driver for Edinburgh with the capability to handle in excess of one million tonnes of cargo over the quayside annually, we are no strangers to hosting big and ambitious projects.”

Today’s announcement represents a vital component in Screen Scotland’s wider vision to drive ambitious growth across all aspects of the film and tv sector, Scotland has doubled its investment to £20million to increase our international competitiveness and better serve the local sector.

This doubling of resources and a shared strategic vision through the establishment of the new Screen Scotland partnership means Scotland is in a strong position for the country’s film and tv sector to fulfil its potential, and to create a highly attractive environment for indigenous and incoming creative companies and productions.

“A significant amount of work, from a large number of people, has enabled us to get to this stage. With the continued support of the Scottish Government, I’m delighted that we are now able to take this critical step in our continued support for the growth of Scotland’s screen sector, which goes from strength to strength.”

1. The tender is available here: https://www.screen.scot/studio

2. Following strategic, economic, commercial, operational and financial evaluation, 31 Bath Road has been identified which, after refurbishment, will provide the long-term facilities for a Film and TV studio.

31 Bath Road is currently marketed as a potential screen production location in its present from by both Screen Scotland and The British Film Commission.

5. Latest available figures show that spend on film and TV in Scotland in 2017 reached £95 million – the highest level since records began – and a £26 million increase on the previous year. Over the past decade, spend has increased more than 300 per cent.

6. About The Port of Leith

The Port of Leith is Scotland’s capital port, located in Edinburgh less than three miles from the city centre. Situated on the south side of the Firth of Forth, Leith is the largest enclosed deep water port in Scotland and has the capability to handle ships up to 50,000 DWT. It is an important economic generator for Scotland and works very closely with the city and its ambitions. The port is owned by Forth Ports Limited. Leith has been a port since at least the 12th century and is proud of its history. The port today is a modern, vibrant maritime gateway. www.forthports.co.uk  @forthports