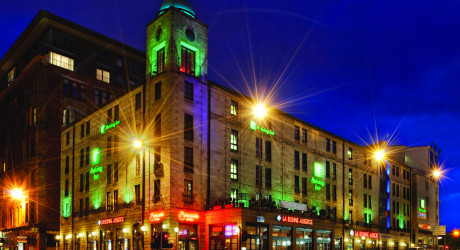 THE AA 4-star Holiday Inn Theatreland hotel in Glasgow has scooped a hatful of awards at the regional finals of the prestigious Scottish Hotel Awards 2019 and fly the flag for the city at the forthcoming national awards ceremony.

The 113-bedroom hotel, which celebrates its 25th anniversary next year, beat off strong competition from all across Glasgow to be named City Hotel of the Year, whilst team member, Carol Dove, was crowned Housekeeper of the Year.

There was also success for La Bonne Auberge, the hotel’s iconic sister restaurant. As well as being voted tops in the hotly-contested Informal Dining Restaurant category, the brasserie’s hard-working staff was also named Food and Beverage Team of the Year.

Holiday Inn Theatreland Glasgow launched in 1995 and its opening blazed the trail for the redevelopment of the entire area, which today is one of the city’s favourite destinations for retail, leisure and dining.

Marc Jones, general manager at Holiday Inn Theatreland, notes: “Since day one, our ethos has remained the same – to deliver the very best customer experience every time.

“It’s therefore testament to our fantastic team that we can celebrate these four awards, particularly since competition in the city has never been stronger. On a personal note, I am especially delighted that our kitchen brigade and front of house team in La Bonne Auberge has been rightly recognised and rewarded, and that Carol Dove, who’s been with us for over 20 years, has been singled out for a very much deserved individual award.”

Holiday Inn Theatreland Glasgow will now represent the city at the national finals of the Scottish Hotel Awards 2019, which take place in the Crown Plaza hotel in Glasgow on Sunday 28 April.