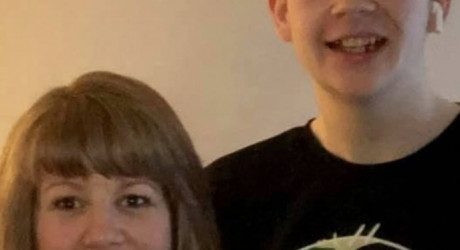 AN Ayrshire woman and her nephew are doing a sponsored wing walk for Epilepsy Scotland.

Andrena Hughes and Lee Riddex will take on this terrifying experience to raise funds for Epilepsy Scotland who have helped Andrena’s son, Eoghan, who was diagnosed with epilepsy since he was four years-old.

Eoghan had a legion on his temporal lobe, which resulted in complex partial seizures with as many as 25-30 seizures in a single day.

Andrena, who lives in Saltcoats, searched for information and found that Epilepsy Scotland was the best platform.

She said: “Eoghan had seizures at home, at school, on holiday, in the car, in the swimming pool and out visiting families. They were very unpredictable.

“There was a major incident with Eoghan and his school, which involved the police and, as a family, we were struggling.

“I didn’t know where to turn to. That’s when Epilepsy Scotland came on board. The help and advice and support we received was second to none. We would never have survived all the drama and grief if we hadn’t had their support.”

Eoghan was offered life-changing surgery, in May 2013 at Yorkhill Hospital. Since then, he has been seizure-free ever since and has been medication-free since May 2014.

Andrena said: “Epilepsy Scotland provides invaluable support to people and families dealing with epilepsy and we always feel indebted to them for what they did for us.

“That’s why I have always done as much as I can to give something back.”

Andrena has raised just over £3,000 for Epilepsy Scotland by doing a zip slide and walking over hot coals.

Andrena and Lee will take on their latest challenge on 1st June in Yorkshire. However, she admits she is not looking forward to the wing walk.

She said: “I am terrified. I am trying not to think about it.

“I hate flying when I am sitting safely inside the plane with my seatbelt on so who knows how I will feel on top of it.”

Robyn Friel, head of Fundraising and Communications at Epilepsy Scotland, said: “Andrena and Lee have undertaken a number of challenges such as walking over hot coals and zip sliding over the Clyde and have raised thousands for Epilepsy Scotland.

“We appreciate their continued support and wish them all the best in undertaking their latest challenge.”

To support Andrena and Lee in their wing walk visit https://www.justgiving.com/fundraising/andrena-hughes3.

MEDIA RELEASE issued by Epilepsy Scotland. You too can share your stories (aka press or media releases), on this site. Email here for more information.