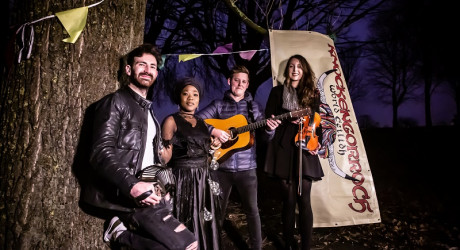 TOP home-grown Scottish talent – alongside an eclectic mix of international acts – will be coming together to create a melting pot of innovative traditional and electronic music in Knockengorroch Festival’s 2019 line-up.

Acclaimed Syrian singer, Omar Souleyman, will top the bill at the roots music festival in the hills. Performing a mix of ‘dabke’ Syrian wedding music, Kurdish rhythms and Iraqi songs combined with breakneck techno-style synths and beats, Souleyman is set to be a firm festival favourite for the hundreds of revellers who return to the festival year-on-year, alongside new festival audiences.

Other line-up highlights include:

Knockengorroch festival organiser Liz Holmes, said: “We’re overjoyed to be hosting some of the most incredible music from across the globe, side by side with tradition and talent from Scotland. Everyone is invited to celebrate differences and shared commonalities in our very own world ceilidh in the hills!”

Other artists confirmed for Knockengorroch 2019 include:

Knockengorroch festival is recognised as the longest running camping music festival in Scotland. It takes place in a beautiful setting in the hills of the Galloway, South West Scotland.

The festival also features comedy and theatre shows, arts, crafts, nature and heritage workshops and activities.  It is open to all ages with a dedicated family camping area, children’s tent and procession plus real ales, good food and a healing area.

Photo attached to this media release is of Moonlight Benjamin and Talisk by Elaine Livingstone. More images are available to download here

Knockengorroch Community Interest Company is a Company Limited by Guarantee. Registered in Scotland: 298142