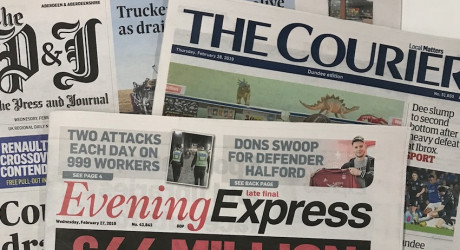 The released figures for July to December 2018 show DC Thomson Media have two of the top five-selling titles in the UK.

Aberdeen’s The Press and Journal has held its ranking as the highest-selling regional title in the UK.

The Courier – which covers Dundee, Angus, Fife and Perthshire – has climbed the table and is now the number two highest-selling regional title based on paid-for copy sales.

Richard Neville, head of Newspapers for DC Thomson Media, said: “These are challenging times for everyone and the ABC figures reflect that but we are delighted nonetheless that The Press and Journal remains the biggest paid-for regional title in the United Kingdom and has now been joined in second place by its sister title, The Courier.

“Our teams work incredibly hard across the country creating the print and digital products, working with advertisers and selling copies and subscriptions and they deserve their place at the top of the list.”

The ABC results show an average loss on daily titles of 13.1 per cent year-on-year, versus a deficit of 10.4 per cent across the DC Thomson Media portfolio, outperforming the marketplace.

The daily DC Thomson Media newspaper titles achieve a combined sale of over 108,000 which is supplemented by a growing digital audience of nearly four million users a month, showing the newspaper brands are being consumed by more people than ever before.