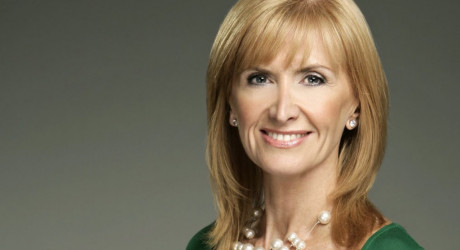 THE BBC’s face of news in Scotland for the last three decades, Jackie Bird, has presented her final bulletin.

The hugely-respected presenter has been the main face of Reporting Scotland for the last 30 years.

However, last night she left the studios with all but a few close colleagues unaware that she’d presented her final programme.

“I’m not leaving the BBC, I’m just vacating the news desk,” she said. “I’ve been fortunate to cover most of the major news stories in Scotland over the last 30 years.

“I’ve been planning this for a while. I thought I’d give it until Brexit was sorted, but I fear I might have to stay for another 30 years,” she joked.

“I’ve been privileged to be involved in so many memorable news events, from seismic political changes to reporting live from Afghanistan. I’ve presented the programme from Washington to Westminster and last year anchoring from France on the centenary of the Armistice was an honour.

“None of this would have been possible without some tremendous colleagues – and it’s them that I will miss most, but it’s time to move on.”

The popular host, who shares presenting duties on Reporting Scotland with Sally Magnusson, also fronts many annual Scottish TV events such as Hogmanay, Children in Need and the World Pipe Band contest for the BBC, and says she wants to have more time to present, write and produce projects outwith news.

In particular, she’s keen to get more involved in ad hoc current affairs specials which she has fronted in recent years, such as the investigation into the Glasgow bin lorry disaster.

She also movingly accompanied Korean War veterans back to where they’d fought, and has followed the recovery of soldiers injured in Afghanistan.

Bird would like to become more involved in writing for both TV and radio while features involving in-depth interviews are also on her broadcasting wish list for the future.

“There’s never been a better time to get involved in new TV and radio programmes in Scotland but being committed to Reporting Scotland for so much of my working week simply didn’t allow me the time,” she said.

“I’m actually apprehensive about making such a big change – even last week I considered changing my mind and staying, but it’s something I have to do.”

Bird surprised senior colleagues when she told them she was ready to quit Reporting Scotland – but all attempts to get her to rethink were met with the steely resolve that newsroom colleagues have come to respect and admire in one of the nation’s most experienced presenters.

“Jackie is one of the most talented and committed journalists I’ve ever worked with.  Her passion and energy for the job are unsurpassed,” said BBC Scotland head of News, Gary Smith.

“I’ve had the pleasure of working with Jackie for many years now and it’s been very reassuring for me and for many of us that she’s been at the helm of the country’s most watched news programme. She’s a brilliant journalist and multi-talented broadcaster who will, I hope, continue to work with us here at BBC Scotland. She was an inspiration to many female colleagues particularly during her earlier years when newsrooms were largely dominated by men. I am certain that she will continue to inspire and influence in all she does next.”