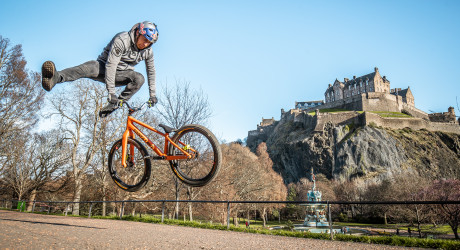 It was viewed by hundreds of thousands of people overnight, skyrocketing a riding career that has seen Danny demonstrating his extraordinary street trials skills all over the world, both on video [more than 350,000,000 views online] and to live audiences.

To date, April 2009 has amassed well over 38 million views on YouTube.

To celebrate this key career milestone, Danny MacAskill and Drop and Roll Tour, his hugely popular street trials stunt display team, head to the capital for the month of August for the Edinburgh Festival Fringe 2019, with a brand new supercharged live indoor show, featuring jaw-dropping stunts and gravity-defying tricks to amaze adults and children alike.

Danny MacAskill’s Drop and Roll Live, with an exceptionally talented team of riders including Drop and Roll’s co-founder and fellow Scot, Duncan Shaw, will be performed at The Lafayette at Underbelly’s Circus Hub on The Meadows, Edinburgh, every day from 03 to 24 August 2019; with two shows a day on 07, 12 and 19 August.

Danny MacAskill said: “After living on the Isle of Skye for my entire childhood, Edinburgh was the first city I ever lived in. Since arriving in the capital in 2006, the city has always been a home from home. It really opened up a whole new world in terms of riding and made me the rider I am today.

“I will always be grateful for the stunning backdrop Edinburgh provided for the April 2009 video that launched my career. Ten years on it seems a fitting time to return to Edinburgh with the Drop and Roll Tour display team for a run of shows with Underbelly at such an Iconic festival. Our new show for Fringe is going to be something very special!”

The team are working on an ambitious, adrenaline fuelled and action-packed debut Edinburgh Fringe show. Hosted by extreme sports commentators Henry Jackson, the hour-long show will be filled with super skilled tricks and audacious stunts, many replicated from the team’s videos, including the Spikey Fence Rail Ride and Tree Flair (Backflip 180) performed on the Meadows for April 2009.

There will be plenty of crowd participation, prizes, post-show poster signings and exclusive Drop and Roll at the Edinburgh Fringe merchandise.

Duncan Shaw, co-founder of the Drop and Roll Tour display team and one of the world’s leading street trials riders, known for his technical and precision moves, said: “After five years of touring all over the world, to some of the most amazing crowds, the time is right to come back home to Edinburgh for a month of awesome shows on home soil in front of the very special international festival audiences we have heard so much about; our debut Fringe show and a first in a Big Top!

“We can’t wait to get into rehearsals to develop some of the crazy ideas we have been talking about in the tour bus for the last couple of years. It will be interesting to see which will make the cut. For this extra special show, we are planning to replicate a number of iconic tricks, previously only seen on screen, for the live shows. It is no secret that some of these video stunts can take hundreds of attempts to perfect, so we really have our work cut out to get them refined and ready for August. No pressure!”

Ed Bartlam and Charlie Wood from Underbelly said: “We’re delighted that Danny and Duncan have chosen to celebrate the tenth anniversary of their association with Edinburgh with their Fringe debut at Underbelly’s Circus Hub in Drop and Roll Live. Circus Hub is the venue for breathtaking stunning stunts and Fringe-goers are sure to have their hearts in their mouths!”

For Drop and Roll Live publicity shots got to https://www.dropbox.com/sh/hx0yi8qrtwooch2/AABE-8QT81Zsf4d_NYw0Bputa?dl=0

Venue: The Lafayette at Underbelly’s Circus Hub on The Meadows

Keep up to date with The Drop and Roll Tour, Danny MacAskill and Duncan Shaw:

Danny MacAskill is a professional street trials rider born in 1985 and raised in Dunvegan on the Isle of Skye, Scotland.

However, it took 18 years of riding before Danny had his ‘breakthrough moment’, which changed his life.

On April 19th, 2009, he released a 5 1/2-minute street trials video on YouTube. Filmed by his friend, Dave Sowerby, the video got hundreds of thousands of views overnight and as of today has been watched well over 38 million times – the world went absolutely crazy about the then 23 year-old.

Since then, Danny has produced numerous viral clips, which have been watched over 350,000,000 times.

His latest project, ‘Wee Day Out’ (2016, 25 million views), takes his viewers on a trip through Scotland.

Danny will continuously be working closely with his partners to cross the boundaries of imagination and produce unique, breathtaking material.

Filmed by his friend, Dave Sowerby, at locations in Edinburgh, April 2009, and has been watched well over 38 million times.

The Drop and Roll Tour

Having talked about it for years and with the aim of doing street trials shows on an unforeseen level and scale, renowned stunt trials riders Danny MacAskill and Duncan Shaw set up the Drop and Roll Tour street trials team in November 2013.

Since 2014, they have performed shows all over the UK and Europe at events including the Glasgow Commonwealth Games Festival, The Belladrum Tartan Heart Festival, the Red Bull Air Race, Royal Ascot, Eurobike, Friedrichshafen and F.re.e Munich, Germany; and the Engen Cycle in The City Event in Cape Town, South Africa.

The team’s riders, all seen individually in stunning viral videos over the last few years, have been on tour and rocking out at events throughout the UK and Europe since summer 2014, entertaining huge enthusiastic and vocal crowds with their awesome skills as they strive to be the biggest and best touring show team around.

Since 2014, we have performed in Scotland, England, Germany, The Netherlands, Switzerland, Czech Republic, Poland, South Africa, Philippines, Indonesia, and The USA.

Keep up to speed with Underbelly at the Edinburgh Fringe

Underbelly is an UK-based live entertainment company. Their events and festivals division operates one of the largest operations at the Edinburgh Festival Fringe, selling over 460,000 tickets for over 200 shows, in 22 venues over 25 days in 2018.

2019 marks the 11th year of Underbelly Festival on the Southbank – one of the biggest multi-arts offerings in London and London’s original pop-up festival, with over 140 shows programmed over six months on the South Bank.

Underbelly Productions is the theatrical arm of Underbelly, presenting, producing and promoting a diverse programme of international work. In 2017, in association with Cameron Mackintosh, they produced a major revival of the classic musical, Five Guys Named Moe, which ran for 30 weeks at the purpose-built Marble Arch Theatre. This scorching production garnered rave reviews and was nominated for three WhatsOnStage Awards (including Best Musical Revival) and as Best Entertainment and Family at the 2018 Olivier Awards. In 2017 they were also associate producers on the UK Premiere of the musical Big Fish starring Kelsey Grammar, which enjoyed a sold-out Christmas run at The Other Palace. As part of the 2018 Edinburgh Festival Fringe, Don’t Tell Me Not to Fly, a one-woman cabaret featuring a revolving cast of some of the West End’s favourite leading ladies, premiered in the 900 seater, McEwan Hall.

In 2018, Underbelly sold over 1.5 million tickets to their various events.