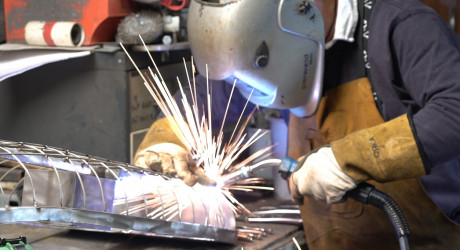 THE Stonehaven mystery sculptor – dubbed the ‘Stoney Banksy’ – has come forward to confirm his identity and give an exclusive interview to BBC Scotland’s arts strand, Loop.

The interview with Jim Malcolm (68) has today (Wednesday, May 8) gone live on BBC Scotland social media outlets and will be screened on the TV series, Loop, on Thursday, May 9 on BBC Scotland.

His sculptural creations made of scrap metal have been popping up around Stonehaven for about 15 years, but the sculptor’s work hit the headlines earlier this year with items on Reporting Scotland and The One Show after his latest piece – a creel fishing boat – ‘mysteriously’ appeared towards the end of 2018.

His sculptures – largely inspired by the sea around his coastal hometown – have flummoxed the wider world as to the identity of their creator… though friends in the area knew it was Jim and often left scrap metal at his door to provide material for his creations.

He has now decided to come forward and tell his story.

Says Jim: “People have been trying to find who I am for a while now… Personally, I get a bit embarrassed about it.

“What does it matter who did or didn’t do it. This will be my first and last interview.”

The Loop strand started three years ago showcasing arts and emerging artists from across Scotland on BBC  Scotland’s digital outlets, but this year it also moved to TV on the new BBC Scotland channel with a weekly programme.

The TV series brings together stories about Scottish cultural figures and different arts practices along with short films from new talent.

As well as being showcased on Loop social media, Jim Malcolm’s interview will be shown on episode four of the series, which is on the theme ‘From Your Own Hands’ and also features visual artist, Rachel MacLean.

She talks about her work, her creative process and how she handcrafts every colourful element of her pieces. Other cultural figures who have featured in the series include Edwyn Collins, Frank Quitely and screenwriter and director Raisah Ahmed.

As he reveals in his Loop interview, Jim has been inspired by the sea from a young age, going out on boats from the age of eight and working much of his adult life at sea before latterly becoming a welder. He retired three years ago. He says: “The sea to me means freedom.”

He was spurred on to take up making his artworks, when he created a steel salmon – which he posted on the shoreline – to wind up a friend who had been found guilty of poaching.

Although he is inspired by the sea, he doesn’t always know how his creations – which have included fish, boats, a seal and a lighthouse all erected near the seafront – will turn out.

He says: “It just evolves when I’m doing it. I never know what I’m doing ’til I’m finished.”

However, despite the acclaim for his work, the pensioner remains modest: “I’m nae an artist, nah, I’m just a guy that sticks metal together…

“I make sculptures for the simple fact I enjoy doing it.”