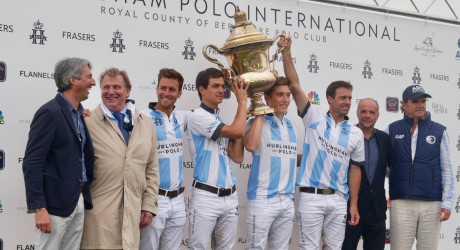 THE 2019 Hurlingham International day took place at the Royal County of Berkshire Polo Club in Ascot yesterday, where Argentina beat England 14-6 for the Coronation Cup.

Argentina were the favourites to win and demonstrated a strong performance taking a fim lead early on. The 27 goal team was made up of Alfonso Pieres Jr., Juan Britos, Bartolome Castagnola Jr and the world number one, Facundo Pieres as Captain.

Sponsor of the winning team, GRM, said: “It has been a phenomenal day for sport showcasing the very best of polo with a selection of some of the world’s finest international players. Both teams played brilliantly and we were delighted to be a part of such a prestigious day.”

Team England also played exceptionally, with their long-standing relationship and experience playing as a team shone through. The team was made up of best young player of the year; Ollie Cudmore, Jack Richardson, James harper and England Captain, James Beim.

Over 4,000 people attended the day with the Argentine Ambassador, HE Renato Carlos Sersale di Cerisano and chair of the Hurlingham Polo Association present.

Scotland also remained present throughout the event, with players being presented a Scottish quaich along with a bottle of Johnnie Walker Whisky from their sponsor.

Argentinian player, Juan Britos, said :“As an international player it is a great feeling to still have the support of a British company. Bringing people together is what sport is all about.”

The Coronation cup is one of the older trophies in polo history. It was established in 1911 to commemorate the coronation of King George V. The beautiful trophy was donated by the Ranelagh Club, and was played through 1911 and 1939.

After two postwar revivals, it has now been played since 1971. The event typically involves a test match between England and a guest country.