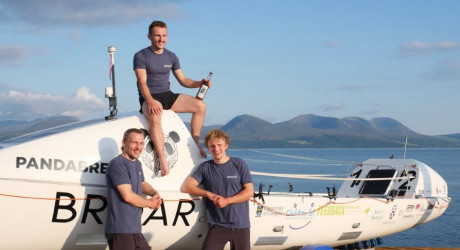 DISTILLERIES on the west coast of Scotland are preparing themselves as a team of ocean rowers sweep through to collect bottles of whisky for charity.

As part of their training for the 2019 Talisker Whisky Atlantic Challenge, considered the ‘world’s toughest row’, the BROAR team – Scottish brothers Ewan, Jamie and Lachlan MacLean – are rowing up the west coast, ‘pillaging’ whisky from the distilleries in a ‘Whisky for Water’ campaign to raise money for their chosen charity, Feedback Madagascar.

From the 1st to the 10th August, they will be visiting numerous distilleries around the west coast from Lochranza on Arran to Talisker on Skye, via Islay, Jura, Oban, Mull and Ardnamurchan. The 300-mile route will help prepare the brothers for their 3,000-mile transatlantic challenge at the end of the year, when they hope to become arguably the first three brothers and youngest trio to row any ocean.

The donated whisky will be blended by a team of experts, led by their father, whisky writer and star of ‘The Angels’ Share’, Charles MacLean. This unique and limited edition, ‘BROAR Blend’, will be sold to fund life-saving fresh water boreholes, delivered by the Argyll-based charity.

Middle brother, Jamie, said: “Whisky for Water represents a fantastic opportunity to train on some of the most challenging stretches of water on the Atlantic seaboard, which will prepare us to some extent for what we expect to face in six months’ time.”

He continued “Rowing through the third-largest whirlpool in the world, the Corryvreckan, will be a highlight and certainly a good test. We must of course take this opportunity to thank all those who have made this event possible. To name but a few: Edwards Engineering, Cairnhill Structures, Nairn’s and Panda Brew.”

Managing director of Feedback Madagascar, Jamie Spencer, said: “We are delighted to have the boys on side for this lifesaving adventure.” He continued: “We all take clean water for granted, but only 14 per cent of the rural population of Madagascar has access to it and for just £10 – the price of a couple of drams – you can give the gift of clean water for a lifetime by texting W4WATER to 70191.”

The whisky ‘pillage’ was originally devised by locals at Lagavulin Distillery on Islay in 2003. They rowed round the island and collected bottles of malt whisky, which were then blended and sold for local charities. By 2010 the ‘pillage’ included a row to Bushmills in Ireland and up to Tobermory.