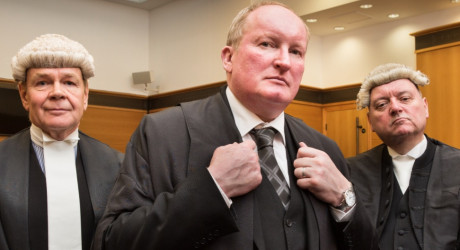 A MYSTERY disappearance. A suspected secret guarded for 16 years. A murder trial in search of answers.

In a co-commission between BBC Two and BBC Scotland, unique two-part documentary, Inside the Murder Trial: The Disappearance of Margaret Fleming, has unprecedented access to a high-profile murder trial that has gripped Scotland.

Exclusive in-court access to this incredible case was granted by the Lord President of the Court of Session, the trial judge Lord Matthews, The Crown Office and Procurator Fiscal Service and Police Scotland.

Filmed by Firecrest Films – the team behind the acclaimed BBC Scotland series, Murder Case – this new series was filmed in and beyond the Glasgow High Court.

The series will premiere on the BBC Scotland channel followed by BBC Two (dates to be announced in due course).

The case will take viewers deep into the inner workings of Scotland’s justice system, its social care system and of a rural community coming to terms with the prospect of a brutal and calculated crime occurring unnoticed in its midst.

Patrick Holland, controller of BBC Two, said: “This is a ground-breaking documentary for BBC Two that takes the audience into the very centre of a trial that gripped a nation. With access to the court, this series will follow the tragic case of Margaret Fleming and the efforts of police and prosecutors to bring her killers to justice.”

Clare Sillery, head of Commissioning, Documentaries, said: “This is a landmark trial to which the BBC has had remarkable access and I am delighted that in doing so we are able to spotlight the fantastic production talent of Firecrest Films in Scotland.”

David Harron, commissioning executive, BBC Scotland, adds: “This series will provide a compelling insight into the work of the police, and prosecutors in bringing these two suspects in this high-profile case to trial.

“And it will also show the work of the defence teams representing the two accused. We have been delighted with the audience response to our Murder Case series, which was made by the same team, and this promises to give audiences yet another fascinating look at the work which goes on behind the scenes of Scotland’s justice system.”

Inside the Murder Trial: The Disappearance of Margaret Fleming (2 x 60’) is produced by Firecrest Films for the BBC. It was commissioned by Patrick Holland, controller of BBC Two, Clare Silley, head of Commissioning, Documentaries and David Harron, commissioning executive, Factual for BBC Scotland.

The commissioning editors for the BBC are David Harron, Hamish Fergusson and Max Gogarty. The executive producers for Firecrest Films are Iain Scollay and Lorraine McKechnie.

The series is directed by award-winning filmmaker, Matt Pinder.