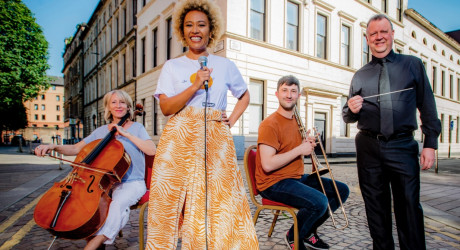 THE buskers who will take to the stage in the rousing concert finale of Emeli Sande’s Street Symphony on BBC Scotland have been revealed.

In it, Emeli searches for Scotland’s best street musicians and follows them as they go from playing for a handful of shoppers on the street to preparing for the biggest night of their lives, performing live in front of a packed auditorium.

Originally, five acts were to be chosen from the dozens of musicians the award-winning singer-songwriter heard on her journey around Scotland. But the standard of talent was so high that Emeli settled on a final six.

Each one will perform two songs at the final concert – one of their own, and a duet of one of Emeli’s songs with her and the BBC SSO. All the music has been orchestrated by renowned composer/arranger, John Logan.

Emeli, whose third studio album, Real Life, was released earlier this month, said: “The stream of talented musicians we found was mind-blowing and really inspirational. I’m glad we stuck with six acts – we absolutely made the right choices. It’s been a great privilege for me to follow them on this journey. Every one of them rose to the challenge and I’m so proud of how far they’ve come.”

Emeli Sandé’s Street Symphony is a BBC Scotland Music, Entertainment & Events Production for BBC Scotland. The final two episodes will air at 10pm on the BBC Scotland Channel on October 3 and 10. The full series will also be available on BBC iPlayer.

The final acts are:

Emeli met Ben at his regular pitch on Glasgow’s Argyle Street and was moved by his heart-felt rendition of a song called Home, which he wrote for wife of 14 years, Laurie, 38. Ben busks to support his family – he and wife Laurie have three children, Joshua, 13, Lily, 11, and Noah, ten. A video of Emeli and Ben singing an impromptu duet of Emeli’s hit, Read All About it, went viral.

Emeli on Ben: “Visually, Ben really stands out with the dreads and the tattoos – he’s so interesting to look at. But for such a big guy, he has this quietness about him and sensitivity to him which is undeniable. To sing Read All About It off the cuff with him was amazing. There’s loads of people with talent but Ben uses his gift to support his family and is willing to sit on the street for hours on end. This is an amazing opportunity for him and well deserved.”

Rachael is mum to two daughters – Jayden, 11, and Nnenna, five. She was inspired by her choir-singing mum to get into music from a young age and has built her own make-shift recording studio at home by constructing a garden shed in one of her bedrooms.

Emeli on Rachael: “I was blown away by Rachael’s whole aura. She clearly finds so much joy and peace in performing music to others and in sharing that. I really enjoyed her voice. It stands out to me as something so unique. At first it has this roughness to it, but it’s just beautiful. She puts these inflections on the end of her phrasing which I think is really beautiful.  As a vocalist I understand how important it is to be an individual.”

The friends met at Langside College in Glasgow’s Southside where Sara was on a drama course and Junbug was studying music. The pair began releasing covers on YouTube soon after and last summer decided to quit their jobs in a pub and a shop to pursue music full-time. They cite their influences as Ed Sheerin, Gerry Cinnamon and KT Tunstall.

Emeli on Sara & Junbug: “Sara and Junbug were real standouts for me. They have an immediate energy and I thought they were really tight together. They were singing an Amy Macdonald song  when I first saw them that was really fast. To be able to do that and have the diction and the presentation on point is not an easy thing to do. I really admired how in sync they were with each other and they just had a real punch.”

Finn was the very first busker Emeli met on her search in St Nicholas Square in Aberdeen and a video of her watching him perform Ben E King’s Stand By Me was a huge hit. Known as Finn HP, the singer-songwriter quit his job as a waiter to pursue his musical career. His first busking stint saw him bring in £40 in two hours, so he decided to stick at it.

Emeli on Finn: “When I first saw Finn, I loved how he delved into music and I loved his intimacy with it. He’s there standing in this massive square with his eyes closed and he’s so involved in the song. It  really reflects in the tone of his voice and the style of his performance. There’s something very humble and soulful about him and I could see that from the start.”

Friends Harry, Matt and DJ got together during the 2018 Edinburgh Fringe, performing their catchy brand of funk for delighted tourists. By the time Emeli caught up with them at their favourite spot on The Mound, they’d decided to concentrate on their music full-time, with Matt and DJ taking to the streets straight after finishing their studies and Harry giving up his job in the family glazing firm to pursue his dream of stardom.

Emeli on High Fade: “They had a full band on the street which is pretty unusual, but it’s their energy and how tight they are together that was so impressive. They trick the audience into thinking a certain break wasn’t  supposed to happen but then the drummer comes in and it all comes together. Their personalities match the music, I think the audience is going to really get groovy with them.”

Classically-trained musicians, Mia and Freya, met in primary five when they were both invited to study at the specialist music unit at their school and have been inseparable ever since. Fiddle player Mia wants to carve out a career as a pop session musician and is currently studying at Leeds College of Music. Cellist Freya would like an orchestral career and is a student at the Royal Conservatoire of Scotland in Glasgow. The pair busk together on the Royal Mile whenever they’re back home in Edinburgh and play both classical and Scottish traditional music.

Emeli on Mia and Freya: “What really stood out about them was their freeness in music, especially as instrumentalists. It’s quite difficult to play a violin and a cello and still really make it rock. I think that’s important about classical music – that we remind people that it is fun and that these melodies are not for a specific section of society. They’re for everybody. I love that they have the energy and the youthfulness to be able to bring classical and traditional music to a younger audience. They just look like they’re having so much fun playing.”