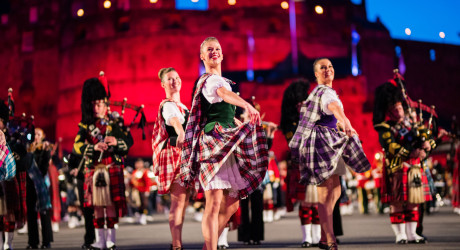 A NEW round of funding has been announced today, to support talented young Scots traditional musicians and dancers.

Arts and cultural organisations across Scotland are invited to apply for a share of £150,000 from The Royal Edinburgh Military Tattoo Youth Development Fund to support traditional cultural activity. Organisations can apply for awards of between £5,000 and £20,000.

“Since its inception in 1950, supporting the future of the arts has been at the heart of the Tattoo. We have been impressed by the incredible talent that exists around the country and are absolutely thrilled to be helping young people from a variety of backgrounds develop their creative skills.

“As we approach our 70th anniversary in 2020, we are very much looking forward to receiving applications for this year’s fund and helping arts groups around Scotland to develop exciting new work with the next generation of extraordinary talent.”

Joan Parr, interim director of Arts & Engagement, Creative Scotland, said: “We are delighted to continue working in partnership with the Royal Edinburgh Military Tattoo (REMT) to deliver this fund, which supports and celebrates the talents of Scotland’s young traditional artists.

“For a third consecutive year, the fund will provide young people from across Scotland with a wonderful opportunity to progress their skills in traditional Scottish arts, support organisations to create new and innovative work, and increase participation in piping, drumming Highland dance and traditional fiddle playing.”

Funding guidance and application forms are available on the Creative Scotland website.

The deadline for applications is midnight Monday 3 February 2020. Proposed work from selected projects should be carried out between 1 April 2020 and 31 March 2021.

In 2018, the Tattoo revealed its intent to continue the company’s growth through an ambitious international expansion and doubling turn-over to £20million by 2025. The Tattoo has performed overseas on four occasions, most recently Australia in February 2019. https://www.edintattoo.co.uk/

Creative Scotland is the public body that supports the arts, screen and creative industries across all parts of Scotland on behalf of everyone who lives, works or visits here. We enable people and organisations to work in and experience the arts, screen and creative industries in Scotland by helping others to develop great ideas and bring them to life. We distribute funding provided by the Scottish Government and the National Lottery. Further information at www.creativescotland.com. Follow us @creativescots and www.facebook.com/CreativeScotland.