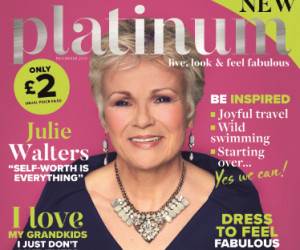 The biggest women’s magazine launch in over a decade, Platinum was launched to redefine the offering for women over the age of 55. Research carried out by publisher, DC Thomson Media, prior to launch, revealed that two-thirds of women 55+ felt misrepresented by the media.

Platinum has set out to tackle issues close to its audience with passion and authority, inspiring them to live, look and feel fabulous.

Ali Kirker, editor of Platinum, said: “We’ve had such great feedback. Women have told us they are inspired to see a magazine that reflects the lives they are leading and which equips them to live life to the full. These women are a force to be reckoned with and it’s fabulous to see Platinum resonating so strongly with them. We have been passionate about creating a brand that’s become a trusted source of information and entertainment.”

The magazine has also been a hit with advertisers looking to reach the grey pound, attracting a variety of premium brands. AGA, Laura Ashley and Farrow & Ball have advertised in the magazine.

Andy Williams, chief revenue officer at DC Thomson Media, said: “Advertisers have been looking for new ways to tap in to this valuable, yet sometimes overlooked audience for years. There has been a lot of interest from clients and agencies around the launch of Platinum. We’ve had fantastic advertising support securing some really strong brands that speak to the Platinum reader. In a short space of time Platinum has become an exciting place to market for this advertising base.”

Part of the appeal of Platinum is its celebratory style of representing the busy, diverse lives of women 55+ with thought-provoking content that’s as stylish as they are. As well as powerful cover interviews, with stars such as Shirley Ballas and Jane Seymour, the magazine covers a range of issues relevant to readers.

MEDIA RELEASE issued by We are Wire. You too can share your stories (aka press or media releases), on this site. Email here for more information.

We are Wire · Media - print · Scotland-wide