Media release: The people who chose extreme isolation, and what we can learn from them 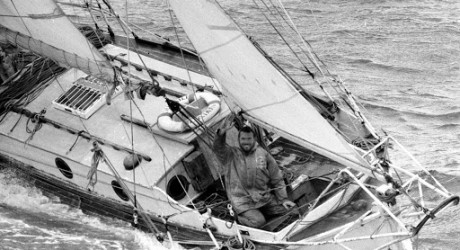 WITH the possibility of entire nations heading into an unknown period of self-isolation, discussions of how you prepare for such scenarios have erupted in the media, across social channels and throughout people’s homes.

It was in 1968 that the British newspaper, The Sunday Times, announced the award of a trophy, The Golden Globe, for the first person to sail single-handed and non-stop around the world. The event was the first organised, non-stop race around the world for individuals. Those attempting to make the journey had little understanding of how the experience would pan out or how their minds would cope with a year in isolation.

The only sailor to complete and therefore win this first feat was Sir Robin Knox-Johnston who crossed the finish line after 312 days alone at sea. Now a sailing legend, Knox-Johnston founded the famed Clipper Yacht Race; an event he started so that everyone who wanted it “could have the opportunity to experience the challenge and sheer exhilaration of ocean racing”.

Sir Robin Knox-Johnston gave us some exclusive comments on his experience of isolation.

“Isolation can be incredibly frustrating. But it does not have to be. People ask how did I manage 312 days alone at sea, but the answer is that I was constantly busy. I had a boat to sail, navigate (before satellites), maintain, steer, plus feed myself. But in that lies the answer: create a project to focus the mind and pass the time. If you are a yachtsman, you can learn and practice your knots, or how to throw a line ashore.

“If you are a landsman, those knots are always useful. Bear in mind I had no-one to talk with. No communications at all for most of the time, so I had to think of things that would keep me mentally stimulated. I took to learning poetry. We have wonderful poetry in the English language, but anything that makes the mind work is good.

“Now, many of us are staying at home with time on our hands, we could put the time to good use. It might amuse children as well.

“Knots are something many of us use daily so why not practice them, and learn a few new ones? It will keep those skills you have learned fresh for when you can get outside and for my Clipper Race Crew – when you re-join your boats next year.

“Isolation is something we are going to have to get used to for the next few weeks.

“I had 312 days of it, but I had plenty to do during that period which made the time pass reasonably quickly. So there is the answer: create a project to fill the time. I cannot get over to my boats where there is always something to do, so the garden furniture is getting sanded and re-painted and then I will have to face up to the long put off job of sorting out everything in my Man Cave, apart from sorting out our new Clipper Race schedule, of course.”

Sir Robin spoke on the current pandemic on his Twitter feed, stating: “Back from the Philippines, the crews now home and the boats sitting for the next 10-11 months by which time we hope this virus will be history.

“Now in self-imposed isolation for which my past has trained me perfectly. Look after yourselves everyone.”

A physical challenge on the surface, ocean racing is fundamentally a mental marathon. An endurance test for the mind to adapt in an ever changing and high-risk environment.

As the power and effect of the pandemic takes hold of the world, the constant change of climate and influx of data leads for new adaptions every day. This is an environment not dissimilar to the challenges faced by individuals that take on these solo excursions.

As a marine marketing agency, Gordon Ritchie, director of GRM Marketing, continues: “Dealing with offshore yacht racing and rowing can bring out the best in you. All of the small teams or individuals are normal people doing extra ordinary things.

“They are all well planned and determined. They all have a complete resolve to overcome any challenge placed in front of them and are determined to get to the start line.. that can be just as difficult as getting to the finish line where the risk lies mainly with the team or individual.”

GRM is no stranger to supporting sailors and rowers making their way to the start line ready to embark on psychological journeys of self-isolation out at sea.

The Talisker Whisky Atlantic Challenge is a 3,000-mile rowing race beginning in La Gomera in the Canary Islands and ending in Nelson’s Harbour, Antigua. The race can take anything from a record breaking 29 days to four, painstaking months.

This year, GRM supported two teams in this race named ‘The World’s Toughest Row’, BROAR as they made their way to the start line and HMS Oardacious in PR during their final stages. In December, team HMS Oardacious became the fastest-serving military team to cross the Atlantic and raised nearly £100,000 to provide mental health and wellbeing support to their submarine community for the Royal Navy & Royal Marines Charity.

The charity aims to support personnel, veterans and families as they overcome challenges faced during and after service.

Following the impact of the pandemic, mental health has arrived back at the forefront of many online and government discussions. With businesses facing collapse, individuals facing job losses and with mankind now confined to their homes, this pandemic is predicted to move from a physical crisis to a mental one.

The anticipation of lockdown and self-isolation have been the anxiety-inducing issue facing individuals world-wide as we adapt to this new normal. It will take a period of adjustment, but as in all situations and challenges we adapt, and can in time prosper.

As serving submariners in the Royal Navy, HMS Oardacious shared their unique insight on self-isolation when embarking on the Talisker Atlantic Challenge.

Lieutenant Hugo Mitchell-Heggs explained: “As a Royal Navy submariner, we are well versed with spending extended periods of time deployed, isolated from society, our loved ones and what most would consider home comforts.”

Mitchell-Heggs continues: “Settling into a routine and being creative is fundamental to one’s own wellbeing. It’s never easy settling into a new pattern, and even for submariners, the first week at sea is often the most challenging.

“We also observed this on our ocean row, adapting to each other and our team’s dynamic, to our new diet, safety culture and challenging environment. Twenty-foot waves and gale force winds from day one was challenging, but, with the right mindset, we adapted and found ways to not just survive but also thrive.

“The benefits of a routine, building things to look forward to in your day are a fundamental tactic for maintaining motivation and positivity while self-isolating.”

Mitchell- Heggs continues: “Settling into a routine helps provide structure to the working day, to the week and to the whole deployment/patrol which can often go on for months on end.

“Nutrition, exercise and mental stimulation are fundamental to thriving. During the ocean crossing, physical stimulation was aplenty (all 12-15 hours of rowing each day) but keeping our mental stimulation took being both creative and adaptable: audiobooks, podcasts, Christmas Day karaoke (we called it ‘Kara-row-kay’… the songs were only allowed to have row related puns – ‘Bohemian Row-psody’, ‘Country Rows’, ‘I would Row 500 miles’… even ‘Get Row’ feat Lil John) and most importantly, conversation with our crew mates – whether it was jokes, banter or a ‘deep and meaningful’ whilst rowing under a moonlit sky.”

Upon speaking to Hugo and taking time to reflect, it becomes clear that in this period of crisis, we, as a society, have found great difficulty in the removal of the freedom to see those that we look forward to seeing or the cancellation of events we look forward to experiencing. Holidays were the first to go, then events and gigs, now seeing friends and loved ones. What we now need to do is to find things in a simple day routine to look forward to.

Your evening meal, your FaceTime to a friend, your weekly trip to the grocery store. Like the submariners who look forward to their short slot in the gym, or their two-minute shower, happiness, contentment and, in the extreme, sanity, is found in the simplest of tasks. The tasks we, on a day-to-day, take advantage of being able to do.

What also becomes apparent when discussing isolation and its mental challenges are the importance of the snippets of communication and information that keep spirits up when individuals are miles from the coast or deep beneath the sea.

Finding a source of creativity, communicating, staying active is key to survival as is remaining positive and having a laugh.

Though being at sea adds in a whole number of dangers, the world population today faces saying goodbye to their loved ones with no foreseeable end in sight. The concept of self-isolation, a once unfamiliar term to the masses, has now become every individual’s reality.

In the coming months, we will see the effects of this new ‘self-isolation’ and begin to understand the trials that sailors, rowers and explorers endure when taking on challenges that disconnect them physically from the outside world.

Gordon Ritchie continues: “In the light of the COVID outbreak, we should consider that we are now at the start line and all we have to do is complete the challenge and get to the finish line.

“The common outcome is that everyone will have gained a lot from the journey, and be in a much better place when the champagne is uncorked.”

In this time, it is worthwhile to challenge yourself, try something new, learn something, don’t stagnate – “If we can do it isolated in the middle of an ocean, anyone can do it from the luxurious comfort of their homes and with that constant connectivity,” muses Lieutenant Mitchell-Heggs.