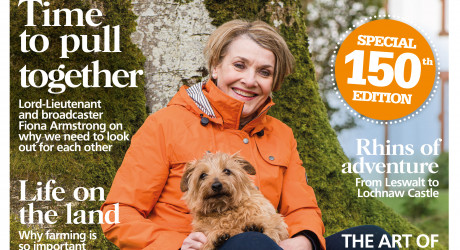 DUMFRIES & Galloway Life has published its milestone 150th issue, paying tribute to its readers, advertisers, sponsors, supporters and everyone who has worked on, and been involved with, the magazine since it was launched 14 years ago.

Editor, Andrea Thompson, said: “When we started to plan our milestone 150th issue, we could never have imagined that by the time we were finishing it, we would be in the grip of a global Coronavirus pandemic and that life as we know it would have changed forever.

“At a time when other publications have been suspended (including our sister magazine, Carlisle Living), when many of colleagues have been furloughed, and the rest of us have taken a pay cut, finishing the magazine was no mean feat.

“But it was important for us to get this milestone issue out for our readers, and to continue to hold up a mirror to all that is good about the region, and to fly the flag for Dumfries & Galloway all over the world. We hope it brings, comfort, joy, pride in our amazing community, and hope of better days to come.”

In her editor’s welcome note in the 150th issue, she told readers: “There is so much we still don’t know, but what I do know is this… we will get through this.

“If there’s one thing I’ve learned in 14 years of working on this magazine, it’s that Dumfries & Galloway has an indomitable spirit, with an indefatigable community that’s second to none.”

The 132-page 150th issue (cover date May 2020) went on sale on April 9, and features a special interview with broadcaster and Lord-Lieutenant of Dumfries, Fiona Armstrong, as well as a look back at some of the key issues from the last 14 years, from the magazine’s launch by the then CN Group as the bi-monthly DGB Life in September 2006, to its 100th issue special (March 2016) and sell-out September 2019 issue, featuring Outlander star, Sam Heughan, on the cover.

Now owned by Newsquest, Dumfries & Galloway Life was named Scottish Community Magazine of the Year in the 2019 PPAS Scottish Magazine Awards in November. It has previously been twice named best in Scotland.

MEDIA RELEASE issued by Dumfries & Galloway Life. You too can share your stories (aka press or media releases), on this site. Email here for more information.