Media release: Four women rowing around the Isle of Skye come up against gale force winds as they train for the Talisker Whisky Atlantic Challenge 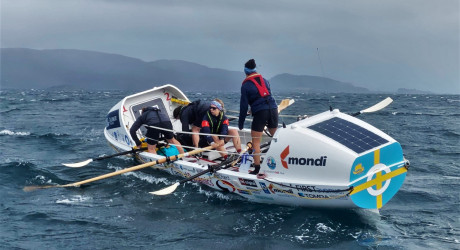 ROWING quartet, ‘The Bristol Gulls’, are rowing around the Isle of Skye in a training expedition in preparation for the Talisker Whisky Atlantic Challenge in December, later this year.

After the team enjoyed a good first few days rowing, the weather turned as they headed out of Portree harbour.

Due to the speed and good weather rowing conditions the team enjoyed on their first day, The Bristol Gulls are hopeful they will still get around the Isle of Skye and back to Talisker Distillery by the weekend.

The Bristol Gulls will be rowing 3,000 miles across the Atlantic ocean in December as part of the Talisker Whisky Atlantic Challenge.

The team – made up of Sofia Deambrosi, Lorna Carter, Phoebe Wright and Sarah Hunt – are raising awareness for two brilliant causes during their campaign – with Clean Up Bristol Harbour and the RNLI benefiting from funds the Gulls raise.

You can follow The Bristol Gulls as they row the coastline of Skye through their own social media platforms and through the event organisers, GRM Marketing.