Media release: Landward presenter is a poet and we didn’t know it 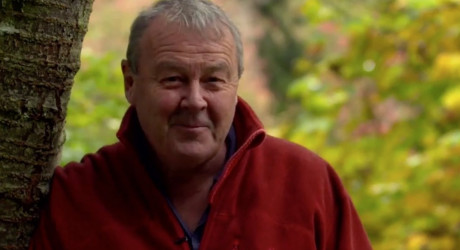 Viewers have got in touch in their droves with the production to find out more about the poem…and about the mystery author, who is… Euan Mcilwraith.

The interest in the poem is such that the Landward team are now putting up a performance of the poem, which featured in autumn special a couple of weeks ago, on Landward Facebook site to help meet the demand for fans wanting copies of it.

Landward series producer, Laura Mitchell, said: “We couldn’t believe it. We had Euan read a few lines of the poem in a report about the beautiful colours of autumn amid the changing leaves and berries at Haddo House in Aberdeenshire. People loved the autumn special and the package presented by Euan, but they were incredibly interested in seeing the poem in its entirety and finding out who penned it, they loved it so much.

“Think they were surprised when they found out it was Euan himself who had written it.”

One of the presenters on Landward, along with Dougie Vipond, Anne Lundon, Arlene Stewart and chef Nick Nairn, Euan is a firm favourite with viewers.

As well as reporting on countryside issues, he has also become renowned for his updates on the restoration of his beloved vintage ‘Landie’ and for his passion for old tractors and farm machinery.

It is, however, the first time he has recited poetry on the Landward series, providing viewers with another string to his bow.

But Euan has been dabbling in poetry for a number of years now, largely out of necessity for Radio Scotland’s Out of Doors series and his efforts have attracted praise of sorts from a former Scottish Makar. He started writing poetry as a teenager and kept it up when he was working offshore on oil rigs off the coasts of Denmark, Norway, Ireland and Somalia before he went into broadcasting three decades ago.

Said Euan, who started as a producer on Out of Doors working with presenter, Mark Stephens: “ I was frustrated by copy right costs which meant the entire programme budget for the radio show was blown if I wanted to feature nature or rural poetry in a piece to add colour. The only option: write it myself.”

His poetry hasn’t been ‘published’ as such but he revealed he has had previous plaudits. Explained Euan: “The highlight for me was when the Scottish Book Trust asked for contributions from BBC presenters a few years back. My offering, featuring Whitehills harbour wall, still hangs in the local library.

“But perhaps the crowning glory of my poetic talents came from Scotland’s Makar, our national poet at the time Liz Lochhead, who after hearing my work at a book trust event in the Mitchell Library in Glasgow, described it as a fantastic piece of work… ‘if you’re a fan of dum-di-dum poetry!’…

“Which perhaps explains why I’ve never really had anything published.”

Despite his modesty, the interest in his poem Autumn Gold has delighted him.

Added Euan: “The poem features the glory that annually arrives in Scotland in the form of autumnal colour and I couldn’t help but be inspired by that.

“It’s just such a fantastic time of year, the reds, the yellows, the browns,  the russets, as I’ve said in the poem it’s nature’s tartan, it’s nature’s church.”

The Landward autumn special is available to view on BBC iPlayer, and the series continues on Thursdays on BBC Scotland at 8pm.

and skeins of geese arrive to graze,

To clear a path for autumn’s gift,

that grabs the soul, and spirits lift.

As leaves they fall and apples blush,

I stand in awe at nature’s brush…

The brush that paints the country spread,

the russets, ochres, browns, and red.

It’s nature’s gift and all its hues,

the rose hip fruit that greets the sun.

The orange, the tans, the fruits so mellow,

that turn the beech the deepest yellow.

That takes the sense, ever keen.

The Rowan tree with berries rich,

the Rowan tree that bars the witch.

a feast of brambles on which he fed.

from black to purple in the pan.

The aspen, beech, the larch, the birch, the oak, the elm,

The horse chestnut tree, the first to shed,

but best of all the colour red.

The autumn glow in all its hues,

that comforts us through winter’s blues.

The alchemy of colours hearten,

The gift from Mother Earth, our souls beguile,