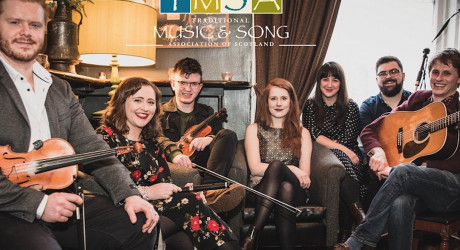 THE TMSA Young Trad Tour came together to record an one-off live performance of their highly-acclaimed studio album recorded earlier this year in March. The video, featuring seven of Scotland’s best young musicians, will debut online at 6pm on 31 December.

Their live performance of the album was filmed in late September, in-line with Covid-19 guidelines at the time, at Adelaide’s Church in Glasgow.

Viewers will be treated to tracks from the album, a mix of new material written and composed by these outstanding young musicians as well as innovative arrangements of traditional tunes. The concert film will be available on the Traditional Music & Song Association of Scotland (TMSA) social media channels, including Facebook and YouTube, with the performance available to watch at any time after it premieres.

TMSA convener, Fiona Campbell, said: “The current TMSA Young Trad Tour album is a brilliant showcase of some of the best up-and-coming talent Scotland has to offer.

“This live performance, captured so beautifully in Glasgow, gave our current group of young musicians, the opportunity to breathe some life in to their songs and tune sets after their tour wasn’t able to take place as planned earlier in the year – as well as the opportunity to play together which they greatly appreciated. Certainly an event to enjoy on Hogmanay and beyond.”

The album and concert film are both supported by Creative Scotland.

Kirsty MacDonald, Traditional Arts officer at Creative Scotland, said about the CD launched in June: “We are delighted to be supporting once again the TMSA Young Trad Tour. The TMSA provides these young musicians of the highest calibre with the opportunity to tour in their local areas, and to create an album which helps raise their profile at this critical early stage of their music career.”

The live performance was captured and edited by Sam Hurt with the audio recorded and mixed by John Weatherby and Kris Koren (Soundsense). The album was recorded and mixed by Angus Lyon and Chris Waite at Gran’s House studio in South Lanarkshire before being mastered at the renowned Castlesound Studios, Pencaitland, East Lothian.

The young musicians also recorded a workshop based on a song or tune featured in the concert, which will be released one by one over two weeks following the premiere.  Again these, or links to them, will be available on the TMSA social media channels – Facebook, Twitter, Instagram and You Tube @TMSAScotland.

2. Creative Scotland is the public body that supports the arts, screen and creative industries across all parts of Scotland on behalf of everyone who lives, works or visits here. We enable people and organisations to work in and experience the arts, screen and creative industries in Scotland by helping others to develop great ideas and bring them to life. We distribute funding provided by the Scottish Government and the National Lottery. For further information about Creative Scotland, please visit www.creativescotland.com. Follow us @creativescots and www.facebook.com/CreativeScotland

Lauded for his ‘virtuosity’ by Irish Music Magazine and hailed ‘magnificent’ by BBC Scotland, Benedict is one of the finest fiddle players in the country and making a huge impact on the traditional music scene. A highlight of his early career was in September 2019 when he took the stage at the last night of the Proms in the Park in Glasgow Green, accompanied by the BBC Scottish Symphony Orchestra.

This performance was recognised as a ‘stand-out moment’ by BBC Proms executive producer. Benedict is also a member of bands Éadaoin, Arkus (launching 2020) as well as duo Benedict Morris & Cormac Crummey whose debut album, Wavelength, made the Longlist for the Northern Ireland Album of the Year 2019 as well as several five-star reviews.

Cameron Ross has always had traditional music as the focus of his life. He followed his dream of being a musician since the beginning of his studies at the National Centre of Excellence in Traditional Music in Plockton. He then attended the Royal Conservatoire of Scotland as well as East Tennessee State University where he researched Scottish music in the Appalachians.

He has collaborated with many artists including Phil Cunningham, The Paul McKenna Band, Tannara and has recently returned from performing for an extended period of time in Disney World Florida and globally aboard the Disney Cruise Line.

Gaelic singer, Catherine Tinney, hails from the Isle of Skye, where she was immersed in Gaelic culture and traditional music from a young age. An experienced performer, she grew up singing at local cèilidhs, attended the National Centre of Excellence in Traditional Music in Plockton, and has performed at international festivals such as Celtic Connections and Festival Interceltique de Lorient.

Luc McNally is a guitarist, bouzouki player, singer, composer/arranger and teacher residing in Glasgow, but originally from County Durham. As part of Kathryn Tickell’s Folkestra Youth ensemble for four years, Luc gained an introduction to traditional music before going on to study Scottish Music for two years at the Royal Conservatoire of Scotland. He makes his living as an accompanist to Scottish and Irish musicians, having developed a distinctive style which complements all forms of traditional music.

Ross is the official Town Piper of Linlithgow, West Lothian. He studied Bagpipes, Scots Song and Whistles at the Royal Conservatoire of Scotland. In July 2017, he graduated with a First Class Honours Degree in Traditional Music—Piping. A World Champion piper, Ross began piping aged seven and was the Pipe Major of the National Youth Pipe Band of Scotland.

He competed with the world famous Boghall and Bathgate Caledonia Pipe Band for many years. He is now a member of the Grade 1 Inveraray and District Pipe Band. Ross has performed in many countries including New Zealand, Australia, USA, Ghana, Russia and all over central Europe. He has also appeared on BBC Hogmanay Live and performed solo on the roof of Murrayfield Stadium.

Sarah Markey is a flute player, singer and harpist who creatively blends Irish and Scottish styles to create self-penned tunes and folk songs. She has toured internationally, including Europe and French Polynesia.

Having been immersed in the Irish-Scots community from a young age, learning music through Comhaltas, Sarah’s style of flute playing has been heavily influenced by her own family background and the links between Irish and Scottish traditional music. This has also been a key influence in her writing, and has helped her to create her own voice within the Scottish traditional music scene.

Hannah joined the National Youth Choir of Scotland aged eight and honed her trad music style until beginning the Scottish Music course at the Royal Conservatoire of Scotland in 2012.

Her powerful vocals have been well-suited to her collaborations and performances with esteemed musical acts such as Royal Scottish National Orchestra, Scottish Chamber Orchestra and international touring with Irish-American band Cherish the Ladies. Her debut album Neath the Gloaming Star was shortlisted for Album of the Year at the 2019 Scots Trad Music Awards.