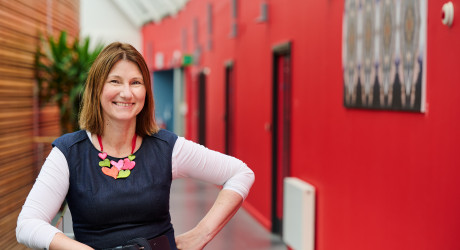 IN a bid to accelerate women’s entrepreneurship to support inclusive economic growth in Scotland, Queen Margaret University, Edinburgh, has appointed its first-ever Entrepreneur-in-Residence.

Carolyn Currie, chief executive of Women’s Enterprise Scotland, will take up the post on August 1.

As a prominent champion of female entrepreneurship, Carolyn will help QMU play a vital role in addressing the gender imbalance which currently exists across the Scottish entrepreneurial landscape. She will lead on the empowerment and education of women who have the potential to develop as successful entrepreneurs, and encourage them to achieve their full potential.

It is estimated that women-owned businesses in Scotland currently contribute £8.8bn to the Scottish economy every year and generate more than 230,000 jobs across Scotland in the process – according to a 2018 Federation of Small Business report.

The Rose Report on Female Entrepreneurship states that up to £250 billion of new value could be added to the UK economy if women started and scaled new businesses at the same rate as UK men. In response to the Rose Report, the UK Government announced its ambition to increase the number of female entrepreneurs by half by 2039, equivalent to nearly 600,000 additional female entrepreneurs.

Carolyn’s appointment will assist the university in its ambitions to establish a Women’s Business Centre. This would be a new physical centre located within QMU’s planned Innovation Hub, which will be part of the Edinburgh Innovation Park.

Kim Stuart, director of Research & Innovation and the Research and Knowledge Exchange Development Unit at Queen Margaret University, explained: “We know that women do not lack ability or ambition, yet only one in three UK entrepreneurs is female: a gender gap equivalent to 1.1 million of missing business.

“Female-led businesses are only 44 per cent of the size of male-led businesses on average, in terms of their contribution to the economy, and male SMEs are five times more likely to scale up to £1million turnover than female SMEs.

“It is imperative that we tackle the gender divide and inspire, motive and equip women to realise their potential by removing barriers and pro-actively nurturing talent.”

Kim continued: “Through a focus on female entrepreneurship, QMU champions the synergies between the drivers to promote innovation, enterprise and gender inclusion. Already, nearly two-thirds of QMU’s start-up companies are created by women, and we aim to lead the way in promoting women’s economic empowerment and entrepreneurship.”

Queen Margaret University’s principal, Sir Paul Grice, said: “QMU has a proud history of supporting educational and career opportunities for women dating back to 1875, so is delighted that Carolyn has accepted the position of our first Entrepreneur-in-Residence.

“Not only will she be an exceptional role model for our students, graduates and staff, she will be integral in raising Queen Margaret University’s profile as a champion of women’s entrepreneurship and a driving force for post-pandemic economic recovery.”

According to the Rose Report, fewer UK women choose to become entrepreneurs in the UK/Scotland than in some other countries such as Canada, Australia and the Netherlands: The UK also lags behind many peer countries on gender parity – for every ten male UK entrepreneurs, there are fewer than five female entrepreneurs.

A recent survey conducted by RBS during the pandemic stated that nearly three quarters (71 per cent) of female entrepreneurs found managing their business stressful compared to half of men (55 per cent).

In addition female owners and entrepreneurs were 17 per cent more likely to have struggled juggling business and family life since the pandemic began than men – 40 per cent compared to 57 per cent – suggesting that women have shouldered more of the responsibility for childcare, home schooling and household maintenance.

Women are also more likely to be working in sectors that are hard hit by the crisis, including hospitality and non-food retail.

Supporting women to apply their expertise in starting a business now can help preserve vital skills and build back the economy.

Commenting on the appointment, Carolyn Currie said: “I am delighted to take up this post and to support the next generation of strong, entrepreneurial women at QMU. We have a huge opportunity to harness the research and innovation work underway and create exciting new businesses to power the Scottish economy. Already, women across Scotland have benefitted from the digital womensbusinesscentre.com and I look forward to building on this pioneering work with QMU.”

Sir Paul Grice said: “To aid economic recovery from the pandemic, it is critical we remove barriers and harness the talent pool which we know exists within our female population. Carolyn Currie is a highly-experienced business leader whose work is celebrated internationally and who has impressive connections across industry and government.

“Her experience in business and as an advocate of women’s entrepreneurship will help to drive forward the University’s work in embedding entrepreneurship within QMU’s culture and supporting and inspiring a new generation of student and graduate entrepreneurs. This work builds on the excellent support our students and graduates already receive from our on-campus Business Gateway service and from being part of our Business Innovation Zone.

“Looking forward, Carolyn will be at the heart of our ambitious plans to establish a Women’s Business Centre which will help unleash some of the untapped potential that exists within our female population.

Carolyn has enjoyed an extensive career at a senior level in financial services. Roles include head of Women in Business at RBS where she co-designed, launched and expanded the women in business proposition to international acclaim. As the first woman to be head of Business Lending, she managed the multi-billion-pound lending book and delivered new digital operating platforms. A practitioner of ethical, data-led innovation, Carolyn achieved industry recognition and awards for her work on new product development.

Now the chief executive of Women’s Enterprise Scotland, she has guided the development of global-leading standards for business support and for digital platform content. Carolyn regularly gives evidence to parliamentary committees on entrepreneurship and economic matters and comments in the media.

Known internationally as an advocate for women’s entrepreneurship and sustainable development goals, she is a founding member of the UK Women’s Enterprise Policy Group, a member of the T20 (the think-tank aligned to the G20) and has contributed policy papers to the World Economic Forum in Davos.

Carolyn is an experienced board member and advisor and currently sits on the Strategic Advisory Board of the University of Glasgow Adam Smith Business School. She also chairs the Board of the Productivity Institute in Scotland. Carolyn has an extensive network of entrepreneurs, business leaders, thought leaders and key influencers in the UK and internationally.

Women’s Enterprise Scotland (WES) was established in 2011 as a not-for-profit Community Interest Company which focuses on the contribution women’s enterprise makes to the Scottish economy. WES aims to create an environment where women-owned businesses can start-up and thrive, unlocking the full economic potential of women.

Last year, 2020, WES launched the digital Women’s Business Centre to deliver gender specific support direct to women-owned businesses. The digital Women’s Business Centre will benefit from a Scotland-wide boost to its profile after WES won a share of the STV Growth Fund, allowing it to promote the platform to a wider audience across the STV network.

The Rose Review of Female Entrepreneurship

The Treasury commissioned Alison Rose to lead an independent review of female entrepreneurship. The review has shed renewed light on the barriers faced by women starting and growing businesses and identified ways of unlocking this untapped talent.

Barriers faced by women (highlighted in the Rose Review Report)

An announcement on the 30th June confirmed the Edinburgh and South East Scotland City Region Deal Joint Committee had approved the full business case for the Innovation Hub that forms the heart of the Innovation Park adjacent to the QMU campus in Musselburgh. Work is soon to commence on planning the design and build of the hub, with completion anticipated to be in 2025.

No syndication No reproduction without permission