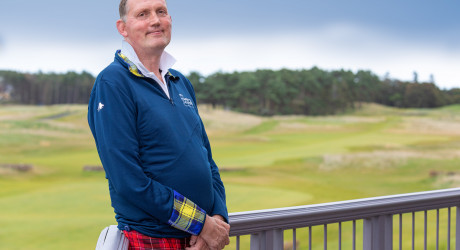 THE Doddie Drive golf tournament will take place on Thursday, 23 September at The Duke’s Course, St Andrews, with all profits going to the My Name’5 Doddie Foundation.

There are some incredible auction prizes up for grabs, with the online auction opening on Monday (13 September).

Doddie Drive founder, Nicole Scott-McKie, said: “We are very excited to hold the first Doddie Drive in St Andrews later this month. It is set to be a fun-filled colourful event, with some incredible prizes up for grabs. We have further events planned for 2022 and we hope that through our tournaments, we will raise significant funds to support the vital work of the My Name’5 Doddie Foundation, both for medical research, as well as supporting those affected by the cruel disease.”

There are still a couple of tee times available, so who will be the first names on the cup? Enter at mtxgolf.com/the-doddie-drive-weekend

For further information or photography, please contact Viv Blair at viv@blendedmarketing.co.uk or Nicole Scott-McKie at info@mtxgolf.com.

Doddie Weir OBE, founder of the My Name’5 Doddie Foundation is suffering from motor neuron disease. Doddie has thrown everything at raising awareness of MND to increase research into this debilitating disease.

The Foundation has two aims:

The Duke’s Course has the flexibility and challenge to appeal to golfers at every level. Its style ranks alongside the great inland challenges, which demand accuracy and inventive play as well as power golf. It is highly-regarded as one of the finest heathland championship courses in Britain and a must-play course for any golfer. It is located in a spectacular setting above St Andrews and gives a magnificent panoramic view over the surrounding countryside to the sea.

The auction lots go live on Monday 13 September. Anyone can bid on these whether they are attending the event or not. The aim is simply to raise as much money as possible for the My Name’5 Doddie Foundation https://www.sliderstock.com/thedoddiedriveauction.

MEDIA RELEASE issued by Blended Marketing. You too can share your stories (aka press or media releases), on this site. Email here for more information.