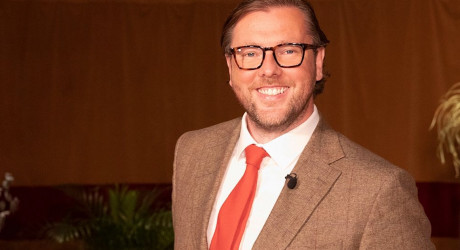 A LINE-up to bookmark is coming up for the latest series of The Big Scottish Book Club hosted by author, Damian Barr.

An array of authors from the worlds of politics, acting, rock music as well as literary lions are booked for the new series, which is due to start later this month.

Further names for the new eight-part series, produced by IWC (a Banijay UK Company), will be announced in due course nearer the transmission on the BBC Scotland channel, available to watch across the UK on BBC iPlayer.

Host and renowned author in his own right, Damian Barr (pictured), said: “I’m delighted that the book club is returning for a third series to BBC Scotland and iPlayer. Once again we’re celebrating a joyful mix of well-known and new writers from across Scotland and around the world. I can’t wait to sit down and talk with them and to meet the audiences at Troon and my home town of Motherwell.”

The eight episodes are being recorded in the middle of October in Motherwell and Troon Concert Halls.

In keeping with the established format of the series, Damian will discuss a different literary theme each week with three guest authors, with a special reading from an invited poet.

There will also be a focus each week on local book clubs from across the country.

Gareth Hydes, commissioning editor at BBC Scotland, said: “The Big Scottish Book Club is a great stalwart of our BBC Scotland winter schedule. And I, like the viewers, am looking forward to being in the very good company of host Damian Barr and this year’s authors. It is another great line-up.

“There is always a lot to enjoy and reflect upon from the chats and of course great inspiration for books to read this winter.”