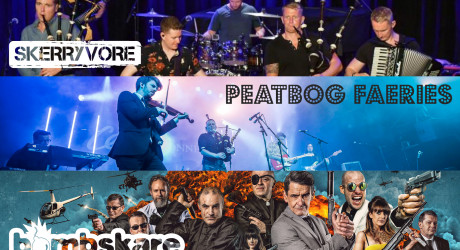 THE 2022 World Fair Trade Gathering is getting underway to return to the stage with a sizzling ceilidh fusion and ska line up, this coming Saturday.

Headlining this high-energy concert at the Usher Hall, Edinburgh, are Skerryvore, Peatbog Faeries and Bombskare, who will take to the stage in an amazing line-up of traditional music from Scotland coming together to celebrate World Fair Trade Day and Scotland as a Fair Trade Nation.

Special guests, Pulse of the Place – a local, youth Leith-based Samba band – will be taking to the stage to help make the concert a super lively one. There will also be a range of stalls selling Fair Trade products in the main foyer throughout the evening.

This concert is set to lift the roof at Usher Hall and will be a fun night to remember and once again has been organised by Hand Up Events, a local social action company, led by director, Tania Pramschufer, who said: “It is wonderful we can celebrate World Fair Trade Day again with such a great and exciting line-up.

“This year, we are focussed on climate change and what we can do to make a difference
linking to the WFTO climate justice theme. https://wfto.com/fairtradeday2022/ on the ‘raising our hands for climate justice campaign’.

Tickets from The Usher Hall https://www.usherhall.co.uk/whats-on/world-fair-trade-
day-gathering-2022 £15 plus booking fee.

World Fair Trade Day is a global celebration on the second Saturday of May. It is organised annually by the World Fair Trade Organization (WFTO) to raise awareness on alternative solutions to the planet’s economic and ecological challenges. The 2022 celebration focuses on Climate Justice #ClimateJustice #LetsDoItFair

Skerryvore Since 2005, Skerryvore have brought their performances to audiences across the globe, from their early days in Scottish West Coast halls and bars, to festival crowds in USA, Canada, Australia and throughout the UK and Europe.

Picking up Scottish traditional music’s ‘Live Act of the Year’ twice on the way – in 2011 and again in 2016 – the band’s wide range of influences and talent produce a musically-expansive, high-energy set that excites and captivates audiences. Fast forward 12 years, add Craig Espie (fiddle) and Jodie Bremaneson (bass), bring in your album producer, Alan Scobie, on keyboards, and mix in the Glasgow music scene, from University Applied Music courses and Traditional Music courses at the Royal Conservatoire to sell-out gigs at O2 ABC and you have a band that has already won Scottish Traditional music’s ‘Live Act of the Year’ in 2011 and again in 2016 – and who, rightly, celebrated their decade by launching their own 6,000-capacity festival.

Their latest album and world tour took their high energy, musically expansive set not just throughout UK and Europe, but also to USA, Canada and Australia. Skerryvore represent the best in contemporary Scottish traditional music, with a growing fanbase worldwide and with the promise of much more to come. Twice winners of Scotland’sTraditional Music Live Act of the Year Award in 2011 and 2016. https://skerryvore.com/band/

Peatbog Faeries Hailing from the Isle of Skye, this year celebrating 31 years, from the moment they take to the stage, the mood is set for a no-nonsense, feel-good atmosphere – each number sounding like an encore in itself.

They tease unlikely combinations from the familiarity of instruments such as fiddle and highland pipes – blending with techno rhythms and soaring sounds and take this to another plain. The
traditional styles that influence the musicians are still to be heard – and when an unexpected drop-down to those glorious core melodies sneaks in – the result is spine-chilling! In short, it rocks – and the audience becomes part of the experience.
https://peatbogfaeries.com/bio/

Bombskare Introducing the bishops of bounce, the sorcerers of skank, the undisputed masters of Scottish ‘death reggae’, the one and only Bombskare – the closest thing you’ll see to an actual northern powerhouse.

This nine-headed ska demon has been tearing up stages the length and breadth of the British Isles since before The Crusades. Reaching zero to 60 skanking miles from a standing start,
they combine top quality dance-along songs with incredible punctuality – leaving every stage like Tokyo following a visit from Godzilla.

Renowned for their technical prowess as much as their infectious ska anthems, they combine lush, three-part harmonies with choppy guitar attacks and an explosive horn section to truly blow the audience away. http://www.bombskare.co.uk