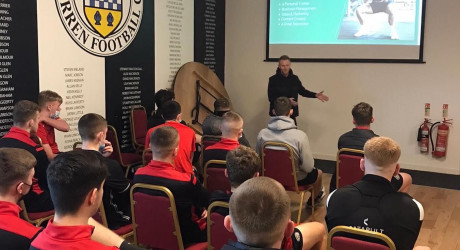 THE Fitness Group has teamed up with St Mirren FC so that young players for the Scottish team have more career options.

From complementing their skills to extending their access to either playing the game or working within it, or finding a new career entirely, young players are finding a whole new avenue to explore, when it comes to their futures.

Being a footballer is often a shorter career than most, so having options and professional support for a second career is a wise move.

It’s always been important for young football players to consider what they’re going to do next. Although players are now able to continue playing for longer, the fact remains that most football players retire from the sport in their 30s (source: here).

They could be aged out of the game, suffer an injury or simply decide to move on from the game. No matter how far they take their careers, it’s a simple fact that they will eventually need to find a new job or start a new career. So, having one eye on the future is critical.

One of the most consistent causes of players leaving the game is due to injury. Football relies on peak health levels, and injuries, even minor ones, can dramatically affect a player’s ability to perform at professional level. Although football injuries are said to be decreasing (here), they remain a concern for younger players.

Then there’s the fact that for many professional footballers, the salary they receive may not be enough, and so a second career can help financially.

Although a Premier league player can earn millions, and even In the English Championship, the average salary is about £7,700 per week, the salary gets less the lower down the leagues you go. Here in Scotland, players can earn an average wage of £600 (here). So, for many players, a second career is something to think about long before retirement even becomes an issue.

St Mirren’s FC has always encouraged its young players to consider their transition to a new career. They aim to get players thinking about and planning what they want to do after football or moving from full-time playing to part-time. The goal is to ensure players have more control over their futures.

That’s where The Fitness Group comes in. Becoming a personal trainer is potentially a great alternative career for football players (here) for a few reasons. The most obvious is that footballers will already be physically fit, but there’s also the fact that they will have worked alongside coaches and nutrition experts already, so they already have a good understanding of many of the subjects personal trainers need to know about.

The decision to partner with St Mirren’s FC came after a few of the players mentioned in their personal development plans that they’d be interested in finding out more. Who better to talk to them about it than one of the directors of The Fitness Group, Scott Agnew.

Scott was ideal, and not only because he used to play for St Mirren. He also set up The Fitness Group while being one of the club’s full-time players. Talk about an inspirational role model for those young football players! After Scott spoke with the young players, four of them immediately signed up for a personal training course.

Sam Ellis, Gavin Gallagher, Calum Johnston and Jay Kennedy are now all working through the course requirements, helping each other with the exams as they do on the pitch. By doing so, they are building a better foundation for their futures.

Great for players and the team

Not only that, but they’re also adding to the value they deliver to St Mirren’s and its fans.

With players trained to personal-trainer level, performance on the pitch is probably better than ever.

PFA Scotland has been quick to praise the partnership between St Mirren’s FC and The Fitness Group, saying: “Many players are interested in continuing within the fitness industry, and this is where The Fitness Group provides several courses.

“This supports the PFA Scotland strategy to provide different options to players. The Fitness Group has been really helpful with the many courses they can provide players, as well as flexible learning such as face-to-face, online and hybrid courses. This ensures that players can study around their football commitments.”

Steven Dick, another director of The Fitness Group, said: “We couldn’t be prouder that we’re helping these young talents to focus on their futures. One of the reasons St Mirren’s FC chose us is because we don’t just give the players their certificate and cut them loose into the world.

“We help them build their business, from marketing to finding a gym to base themselves on. It’s the perfect fit for players, young and old, looking to get plans in place to safeguard their future beyond the game. We’re delighted to be a part of that.”

MEDIA RELEASE issued by Exposure Ninja. You too can share your stories (aka press or media releases), on this site. Email here for more information.