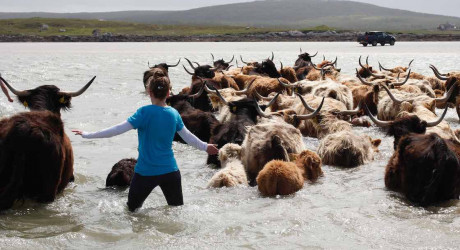 SCOTS photography collective, Document Scotland, is delighted to announce the details of their major forthcoming exhibition, Reflections on a Changing Country (German title: Ansichten aus einem Land im Wandel), which will open at the Museum of European Cultures (MEK), Berlin on 18th August, and run until 20th November, 2022.

It will be the photography collective’s first exhibition in Germany and coincides with the tenth anniversary of their formation. The exhibition will feature projects by Document Scotland’s four founding members, Jeremy Sutton-Hibbert, Sophie Gerrard, Colin McPherson and Stephen McLaren.

The special exhibition Reflections on a Changing Country will take place within the framework of the 18th European Cultural Days which is dedicated to the culture and heritage of the country, seen through the photographs of the collective.

Combined with an extensive programme of cultural events, the exhibition presents a nuanced picture of Scotland as a multifaceted nation.

Full details of the programme are available at https://www.smb.museum/en/museums-institutions/museum-europaeischer-kulturen/exhibitions/detail/document-scotland/

The four bodies of work on display will be: Jeremy Sutton-Hibbert’s Let Glasgow Flourish, a hard-hitting series of images looking at street politics and protest in his native Glasgow taken over the last decade, work from Sophie Gerrard’s long-term project, Drawn to the Land, about women farmers in Scotland, Colin McPherson’s Treasured Island, an intimate profile of life on Easdale, the smallest permanently-inhabited Inner Hebridean island, and A Sweet Forgetting by Stephen McLaren which examines the historical links between this country and Jamaica’s sugar industry and slavery using contemporary photographs.

Commenting on the exhibition, Document Scotland’s Sophie Gerrard said: “We are really looking forward to presenting our photography at one of the most prestigious galleries in Berlin.

“It is exciting to be able to showcase our work to a new audience who we hope will engage with the stories and images we present about life in Scotland today.

“We are very grateful for this opportunity and hope that it can lead to more international collaborations and partnerships in the future.”

Reflections on a Changing Country is curated by Susanne Boersma from MEK and was originally shown as a travelling exhibition titled A Contested Land which premiered at the Martin Parr Foundation in Bristol in 2019 and subsequently toured venues in England and Scotland over the following year.

Formed in 2012, Document Scotland is a collective which has been involved in events and projects over the last decade, including The Ties That Bind, their landmark show at the Scottish National Portrait Gallery in 2015-16 and major exhibitions at Street Level Photoworks, Glasgow, Impressions Gallery, Bradford and the Festival Interceltique in France in 2017.

Earlier this year, Document Scotland devised and delivered a hugely successful engagement event called Show Us Colonsay which built on previous community-focused projects in Shetland and with groups of Syrian refugees in the Highlands. The collective’s members continue to work on their own individual projects documenting life in Scotland at a pivotal time in the nation’s history.

For further information about Reflections on a Changing Country or any of Document Scotland’s other activities, please contact:

MEDIA RELEASE issued by Document Scotland. You too can share your stories (aka press or media releases), on this site. Email here for more information.