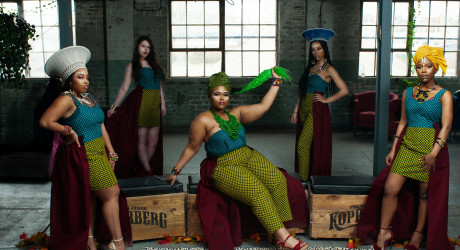 Sold-out at the Edinburgh International Festival 2021, Shona the Musical Choir comes fresh from a Fringe Festival run to The Gaiety at Ayr

BASED in Edinburgh, the choir sings original songs from African composer and playwright, Neo Vilakazi, who lives and works in Scotland. Shona, as Scottish a name as you can find, is also a tribal name in Zimbabwe.

The choir’s music and narrative is based on a fictional journey of a young African man sent to Edinburgh for education where he meets and marries a local lass. In this critically-acclaimed performance, the voices of Africa and Scotland blend together in the richest of harmonies akin to those of ‘The Lion King’, ‘Ladysmith Black Mambazo’ or Paul Simon’s ‘Graceland’.

Neo Vilakazi says: “This story and music is inspired by real events and the socio-political turmoil of Robert Mugabe’s rule of Zimbabwe as well as elements of my own experience of life in South Africa and Scotland.  This is not a typical choir rendition as we have merged song and dance with new technology by integrating digital projection into our colourful performance.”

Jeremy Wyatt, chief executive of The Gaiety, says: “I’ve been finding ways to support Neo as he’s developed this show for four years or more and I’m really excited we are now able to bring it to The Gaiety. Especially given the great audience feedback and five-star reviews it garnered at the Edinburgh Festival last year.”

Performed by talented artists, the vocals, dancing and acting have been described as “simply stunning” (The Scotsman).

“Vilakazi’s lyrics and composition is varied, joyous and breathtaking. Each piece of music has its own energy and is met with equal praise by the audience’s echoing applause” (5* Musical Theatre Review)

Shona the Musical Choir is only on for one performance: Thursday 25th August, 7.30pm at The Gaiety, Carrick Street, Ayr.

Don’t miss this five-star star show – chosen by theatrescotland.com as one of its top ten shows to see this August – hurry and get your tickets NOW from https://thegaiety.co.uk/events/shona-the-musical-choir/ or tel: 01292 288 235 or in-person at the Box Office!

More details, including dates and locations of other performances this year, are at www.shonathemusical.com. Suitable for ages 12+.

Photo credits – available on request if not supplied already

Creative Scotland is the public body that supports the arts, screen and creative industries across all parts of Scotland distributing funding provided by the Scottish Government and The National Lottery.

Further information at creativescotland.com. Follow us on Twitter, Facebook and Instagram. Learn more about the value of art and creativity in Scotland and join in at www.ourcreativevoice.scot. Tour dates in Ayr, Inverness, Perth and Aberdeen are supported by Creative Scotland funding.

The Gaiety Theatre Built in 1902, The Gaiety is a category B-listed performing arts venue. After a forced closure in 2009 the theatre re-opened in 2012 under Ayr Gaiety Partnership’s management with the vision to re-energise the performing arts in South Ayrshire. The Gaiety’s £2.4 million refurbishment was completed in September 2016.

Most of The Gaiety’s core income comes from ticket sales and rental from the Stage Door restaurant. Over the last five years, Ayr Gaiety Partnership has created well over 30 jobs directly, supported up to 100 training places a year and made an economic impact of around £1.8 million to Ayr each year.

Gaiety outreach projects for young people and older people with dementia along with partnerships with Ayrshire College and University of the West of Scotland have involved more than 7,000 people over the last three years. The Gaiety is run with a small staff team of ten and supported by a significant volunteer effort, valued at between £250,000 to £300,000 a year.

It is also touring to:

Mote dates and venues may be still added – visit www.shonathemusical.com for updates or contact us!