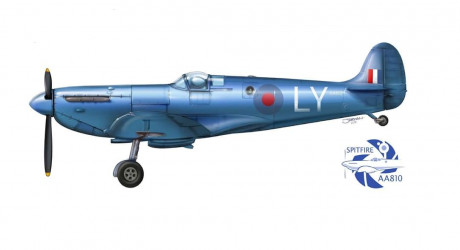 LATER this month (20-22 September), the first Sandy Gunn Aerospace Careers Programme (SGACP) roadshow to be held in Scotland, will be hosted by Aero Space Kinross (ASK) – at Strathallan School in Perthshire.

The Sandy Gunn Aerospace Careers Programme is a venture dedicated to inspiring and assisting young people in respect of engineering generally, aeronautics and astronautics specifically, and then supporting those that enter and continue careers in aerospace.

Recognising the severe shortage of future engineers in the UK, and world right now, and having identified that one of the main blockages to young people entering the industry could be a lack of accurate and relevant information, the SGACP has set about doing all it can to increase the number of young people undertaking STEM learning.

Schools from across Perth & Kinross, Tayside and Angus have been approached by ASK to attend the event aimed at S4-S6 pupils, who will discover more about the life and legacy of local Auchterarder, World War Two pilot, Sandy Gunn – as well as a presentation from guest speakers from the aeronautics industry including The Royal Aeronautical Society, Leonardo and UHI (University of the Highlands and Islands).

Eight schools* have come forward to participate, with around 300 pupils attending over the three-day event.

On the day, the SGACP team and key industry speakers will help inform pupils of current and potential opportunities available and explain the routes into those careers and how they could be supported and mentored as they progress through their careers.

Pupils will also be able to view some amazing exhibits including a ¼-scale model of a Spitfire; a Merlin aircraft engine and an Infra-red Counter Measures (IRCM) system mock-up, to name a few.

Welcoming the careers event to Strathallan School, Alisdair Stewart, chair of ASK, said: “Our collaboration with the SGACP could not have come at a better time as we are well out of lockdown now and we know there is real ambition out there for aviation and aerospace careers, but it is all about drawing out a clear pathway for young people to follow and showcase how best they can enter into these roles.

“It is also a vital part of our skills development in the aerospace field to grow talent and maintain a strong and burgeoning engineering industry in Scotland.”

Speaking of the combined partnership efforts in Scotland, chair of the SGACP, Dr Michael Smith, said: “Aero Space Kinross and the Sandy Gunn Aerospace Careers Programme have been developing relationships since September 2019 when they were guests at the SGACP launch at Cranfield University.

“Although Covid 19 caused our presentations to be delayed across the entire UK, we are very much looking forward to bringing what has turned out to be our highly popular school roadshow to Scotland this autumn.”

Who was Sandy Gunn?

Sandy Gunn was a young man from Auchterarder who gave up his training to become a diesel engineer in order to join the RAF. Shot down whilst flying an unarmed photo reconnaissance Spitfire over Norway in 1942, Sandy spent two years in a POW camp before escaping in what became known as the ‘Great Escape’. Captured after two days on the run, Sandy was executed by a Gestapo officer, it is understood on the direct orders of Adolf Hitler. He was just 24 years-old. http://aerospacekinross.com/partnership-with-sandy-gunn-aerospace-careers-programme/

For information on the Sandy Gunn Aerospace Careers Programme and the associated restoration to flight of Spitfire PR.IV AA810 visit: www.acp-aa810.co.uk and  www.spitfireaa810.co.uk/

What is Aero Space Kinross?

ASSET, a community benefit society, community-led, controlled and operated for the benefit of Kinross-shire and the community it serves, is working towards the creation of a family-oriented aerospace discovery centre – Aero Space Kinross – which will provide a tremendous opportunity  to engage families with this project that will bring huge economic, educational and tourism benefits to the area – as well as providing locals, Scots and visitors alike with an unique flight themed science and space centre.

Plans for this uniquely-themed aviation, astronomy and space flight centre based in Kinross in the heart of Scotland are well under way, with Tayside Deal funding allocated and a plan in place to site it on/near the M90 at Kinross. The intention is to make the centre an interactive, fun, educational and inspirational experience that will touch individuals from all over the UK and beyond. This ‘must-see’ destination – once it is built – will include outstanding flight motion simulation exhibits and a fully-immersive 3D planetarium, highlighting aerospace exploration.

It will be a chance to influence and inspire young people in the area, who might not have otherwise thought of a science career and showcase Scotland as a hugely dynamic and burgeoning aviation and aerospace technology community.