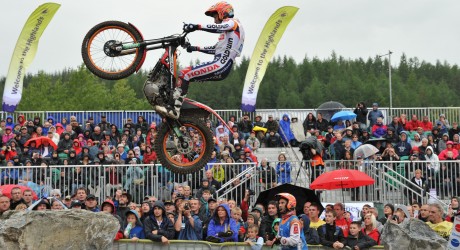 ON Saturday 30 and Sunday 31 July, the Nevis Range, Fort William, in the Outdoor Capital of the UK, will again host the UK leg of the 2011 SPEA FIM Trial World Championship, the 36th edition of the biggest, the most important and the best motorcycle trial competition series on the international calendar.

Seven other rounds will be hosted in Germany, France, Japan, Spain, Andorra, Italy and Poland in the 2011 series.

The UK World Trial 2011 also marks the second year of a three-year plan that will see the prestigious FIM Trial des Nations being staged at Nevis Range in 2012, as this inter countries competition visits the UK mainland for the first time since the competition started in 1984.

As a major focus for both country and rider 60 of the most accomplished, composed and skilful motorcycle trials riders from 15 countries around the globe will descend on the Scottish Highlands to battle it out for valuable points towards the 2011 SPEA FIM Trial World Championship World Pro (male only at Fort William), World Junior (male and female) and World Youth (male and female) titles.

There will be a real war of attrition between riders as Fort William hosts the penultimate round of eight Grand Prix events; the potential for titles to be both won and lost high on the agenda.

Dougie Lampkin (2010 world number seven), who has dominated the modern era of the sport with 12 World Championship titles to his name, will be leading the UK charge.

He will be joined by elite riders James Dabill and Michael Brown.

They will be keen to put in an impressive performance in front of a home crowd, looking for that all important win on home soil.

Top international riders hoping to take pride of place on top of the Fort William podium include the in form Toni Bou (current and four-times world champion) and Adam Raga (2010 world number two), both from Spain; together with Takahisa Fujinami  (2010 world number three) from Japan affectionately known as Fujigas by his fans.

Again, with the support of EventScotland, The Highland Council and Highlands and Islands Enterprise, this will be the only world-status trial to be hosted in Great Britain during 2011 and will seek to set new standards in terms of this type of event.

Jake Miller, from L+M Events, organisers of the UK World Trial, said. “We are delighted to be bringing The SPEA FIM Trial World Championship back to Scotland once again, and to have the chance to see the best riders on the planet do battle in such an incredible setting.

“Thanks to the kind co-operation of both the FIM and Nevis Range we have managed to secure a date that now falls in the school holidays, which should allow more families and fans to be able to enjoy what promises to be yet another memorable event.”

Paul Bush OBE, chief executive officer for EventScotland, said: “The 2010 SPEA FIM Trial World Championship was a great event with the spectacular scenery of Ben Nevis combining with a well-organised championship to create a spectacle for everyone who attended or took part.

“EventScotland continue to support this event which attracts many international visitors to the local area and puts Scotland on the map as the perfect stage for events.”

Up to 8,000 spectators are expected to attend this spectacular display of trials in July.

The main competition day will be Sunday with Saturday’s timetable offering a mixture of unique and exclusive activities including autograph and meet and greet sessions with the world’s top riders, official practice and mind-blowing displays by Scottish street trials sensation, Danny MacAskill.

Saturday will also be a great day to plan the best viewing points ready for the exciting competition on Sunday.