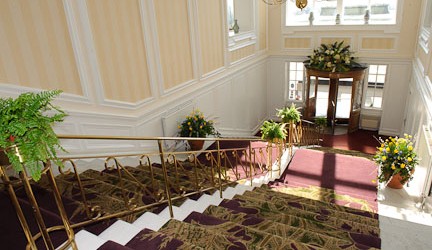 PEEBLES Hydro, one of Scotland’s largest and grandest family-owned hotels, has won a prestigious design medal at the Scottish Hotel Awards for the completion of the first phase of a lavish refurbishment and upgrading programme of its foyer and lounge areas.

As part of a rolling programme of refurbishment, half of the Hydro’s 132 bedrooms have been upgraded and redecorated over the last two years; however, it is the investment made in the makeover of its public spaces that caught the eye of the award judges.

Graham and Fay Cowan, directors at Peebles Hydro, said: “We’re delighted to win this design medal for the significant investment made in our public areas that lend the hotel a distinctly contemporary classic design appeal.”

Says a spokesperson: “The Hydro’s refurbishment is perhaps most obviously prevalent in the replacement of its 60 year-old traditional red carpet with a classic, contemporary heather-coloured carpet featuring a Timorous Beasties thistle motif.

“Whilst featuring a contemporary design, this carpet is interwoven with the Hydro’s history; its design inspired by its oak-panelled Bannockburn Room, in the only part of the original building to survive the fire of 1905, where a thistle motif is depicted on the original oak fireplaces.

“Indeed, the Hydro’s previous logo featured a thistle on a vine; a logo now incorporated into the new McMillan Hotels thistle head logo.

“Over the years, Peebles Hydro has changed and evolved to meet changing lifestyles whilst maintaining many traditional values.

“Now owned by the McMillan family, it is a hotel and leisure resort which is loved by young and old alike.

“Having closed in January for several weeks whilst the refurbishment took place, the Hydro has since re-opened to guests. The next phase of the Hydro’s extensive refurbishment is scheduled for this autumn and will include the redecoration of its large ballroom, popular for weddings and conferences throughout the year.”

Graham and Fay Cowan were also presented with a Gold Laurel – Outstanding Achievement Award for the restoration of the beauty of Glenapp Castle and Gardens at the Scottish Hotel Awards while Glenapp was named Romantic Hotel of the Year 2011. A Chef Commendation was awarded to Jamie Muirhead, head chef at Cally Palace.

Issued on behalf of Peebles Hydro by Liquorice Media 0141 561 4018 www.liquorice-media.com