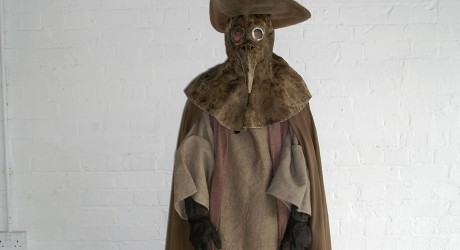 THEY say that artists can anticipate the zeitgeist and that certainly seems to be the case with Frank To, the young Glasgow-based artist with a growing international reputation as a leading contemporary figurative painter.

No sooner had he opened his first major art show for two years, featuring a series of paintings depicting the mediaeval plague doctors, which have fascinated the artist for the last three years, than a breakthrough in a cure for the bubonic plague was announced by Albany Medical College in New York.

Says a spokesperson: “The breakthrough works by building up resistance to disease in the nasal passages and stopping the infection taking hold in the body. It could offer protection to flu pandemics such as swine flu and bird flu as well as biological threats to life including the bubonic plague.”

To said that his mediaeval plague doctor exhibition is inspired by his fascination with the imagery and historical context of the subject and the relevance of plague doctors to the modern world.

“This exhibition was inspired by the growing incidence of biological threats and viral pandemics arising over recent years and it’s fascinating to hear that scientists have just discovered new ways to protect against such diseases. Perhaps I sniffed a cure for bubonic plague in the air!

“Yes despite this scientific breakthrough, I continue to find it fascinating that, hundreds of years ago, town and city councils paid fortunes to plague doctors to aid sufferers, whilst today, in stark contrast, despite Scotland having some of the world’s leading specialist units for the treatment of infectious diseases, we are seeing the NHS subjected to radical cost-cutting reforms.”