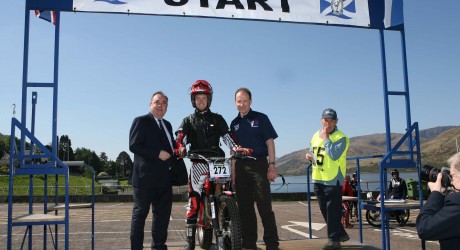 ALEX Salmond – First Minister of Scotland – was a welcomed visitor to the Scottish Six Days Trial (SSDT) earlier today, as he toured the Parc Ferme as part of his current election campaign.

The charasmatic politician was in good spirits as he enjoyed the glorious sunshine that has beseiged Fort William in recent days.

The SNP leader took time out from his busy schedule to meet a number of competitors of the 276-strong field as they were about to set out on their first day of the event that celebarates its 100th anniversary in 2011.

SSDT clerk of the course, Mark Whitham, was on hand to meet the First Minister and to give him a brief history and overview of the event, which celebrates its centenary this year.

One hundred years on, the SSDT continues to attract competitors from all over the world and is constantly oversubscribed in terms of entries, thus confirming its ongoing popularity and importance within the global sport of trials.

Speaking about Mr Salmond’s visit, Whitham stated: “It is obviously a great honour for the Edinburgh and District Motor Club to welcome the First Minister to the Scottish Six Days Trial and especially with this being our one hundredth year.

“So far, we have been blessed with fabulous weather, which is a good start to what we hope will be a fantastic and historic week.”

During his visit to the West End car park, Mr Salmond said: “This is an event that has great history, and when you look at the surrounding landscape you can perhaps understand why it has been so popular for so many years.

“I am sure when the riders who have come from as far away as Australia experience this terrain, that they will want to come back over and over again.

“More recently, I have taken an interest in car rallying with the IRC series having come to Scotland in the last couple of years, and now I will also be following this event too as it looks absolutely great here today.”

Mr Salmond rounded off his visit by taking the opportunity to chat with SSDT regular, Rhoda Rathmell, wife of former SSDT winner, Malcolm Rathmell, and co-owner of Sherco UK, whose leading rider this year is Alexz Wigg – the 2010 SSDT victor.

Marking its centenary, the 2011 Scottish Six Days Trial will take place throughout Lochaber, The Outdoor Capital of the UK, in the north west Highlands between Monday 2nd and Saturday 7th May – for more details please visit www.ssdt.org.