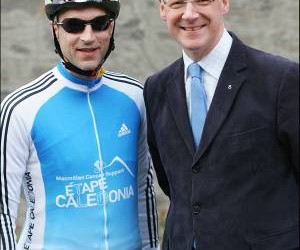 SCOTTISH racing cyclist, Graeme Obree, nicknamed ‘The Flying Scotsman’, has confirmed he will open this year’s Macmillan Cancer Support Etape Caledonia cycle challenge – immediately after bearing formal witness to the startline nuptials of fundraisers, Rick Millin and Jo Louden, who will tie the knot in front of 5,000 participants in the UK’s biggest closed road cycling event.

Graeme Obree is a Scottish racing cyclist who twice broke the world hour record, in July 1993 and April 1994, and was the individual pursuit world champion in 1993 and 1995.

This is the second time he has participated in Etape Caledonia, an IMG Challenger event.

Recognition for Graeme Obree’s achievements have grown over the years and, in December 2009, he was inducted into the British Cycling Hall of Fame.

He was known for his unusual riding positions and for the ‘Old Faithful’ bicycle he built.

His life and exploits have been dramatised in the film, The Flying Scotsman, including his challenges in dealing with clinical depression.

Obree commented: “I can’t wait to take part in this year’s Etape Caledonia.

“I rode part of the course last year and it was great fun to get out on the roads with so many cycling enthusiasts.

“I’m particularly looking forward to bearing formal witness to Rick and Jo’s big day – as fellow cycling enthusiasts, I really do wish them both all the very best. I can’t think of a better way to start married life than pedaling off into the Scottish sunrise together.”

Tris Jones, biking events coordinator for Macmillan, said: “We are delighted that Graeme Obree is going to take the lead at the start of this year’s Macmillan Cancer Support Etape Caledonia.

“We have over 1,400 fundraisers participating in this year’s event, including Rick and Jo who will marry at the start line, and all of the money they raise will be used to fund our vital cancer services, ensuring we help the two million people in the UK who are currently affected by cancer.

“Graeme is an inspiration to so many cyclists; I am sure they will relish the opportunity to take part in the same event as this historic individual.”

The event starts and finishes in Pitlochry, Scotland, with a host of attractions for spectators as well as riders.

Amy Whiteley, IMG Challenger World, said: “We’re delighted to have Graeme back in the saddle and opening this year’s event. It’s a real treat for Rick and Jo that he has agreed to bear witness to their marriage – we couldn’t think of a better wedding gift for a couple who met while cycling and share this passion together. “