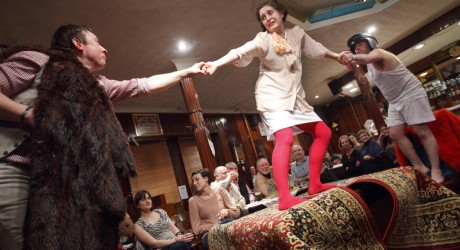 Nominated in Four Categories for 2011 CATS Awards is Coming to Oran Mor, Glasgow: The Strange Undoing of Prudencia Hart

An evening of investigation and exploration of Supernatural Ballads

FOLLOWING a sell-out Scottish tour and rave reviews earlier in the year, The Strange Undoing of Prudencia Hart returns to Glasgow and opens at Oran Mor with a preview on Thursday 21 July and plays until Saturday 30 July.

The Strange Undoing of Prudencia Hart takes theatre into pubs and other unlikely venues, where stories are told, re-told, sung and passed on. So, now is the time to share a lock in with the National Theatre of Scotland’s company of actors and musicians. Indulge in an evening of supernatural storytelling, music and theatre inspired by the Border Ballads, Robert Burns and the poems of Robert Service.

“The bare, rolling stretch of country from the North Tyne and Cheviots to the Scottish southern uplands was for a long time the territory of men who spoke English but had the outlook of Afghan tribesmen; they prized a poem almost as much as plunder, and produced such an impressive assembly of local narrative songs that some people used to label all our greater folk poems as ‘Border ballads’.”

“I’m excited and proud that Prudencia Hart has received so many nominations. It’s a show that breaks so many of theatre’s usual ‘rules’, and is so direct, there are none of the usual boundaries between audience and performers – it’s a true ensemble piece, so it’s wonderful and very fitting that the whole company, Aly Macrae’s brilliant music and David’s stunning writing have all been recognised in this way.”

Writer, David Greig, director Wils Wilson and composer Alasdair Macrae spent a weekend in an old pub in the Scottish Borders researching the Border Ballads for the show.

It was the coldest winter for many years and maybe it was the unique atmosphere in the pub that night or maybe it was the knee deep snow outside, but no-one wanted the evening to end, so, at midnight. the landlord locked the doors and they found themselves in a lock-in.

Deep in the wee hours, one old man told a story about another group of people who’d come to look for songs a few years back and of how one of them, a woman, had never after been seen again.

It was a story, which he said was ‘110 percent true’ a story of love, of music and of the Devil. It was the story of The Strange Undoing of Prudencia Hart and it is that tale that will be told to you, if you have the nerve to hear it.

Twenty-eight year-old Prudencia Hart is a collector of folk songs, an academic, who has devoted her life to the study of folk material.

On the night of the village fete she came to town to collect song material for her thesis Paradigms of Emotional Contact in The Performance and Text of Traditional Folk Song in Scotland 1572 – 1798.

She gets caught up in a lock in with a bunch of locals and that’s when she hears of the existence of a song beyond song… the original song… the uncollected song… the song of undoing and sets out to find it.

What Prudencia doesn’t know is that the song of undoing belongs to the devil. The wild journey through the night takes her, into and out of different supernatural and natural realms always looking for the song until finally – she discovers it – and is undone. She returns to the pub… where… in the last and culminating act of the lock in ceilidh – she sings the song of her own undoing.

It is a spell binding and intimate experience for the audience as they are part of the performance, with the actors right next to them, sometimes sitting at their table, and they could be called upon to be involved in the action while the show happens all around them.

Music and song are major elements, so on occasions the audience join in with the singing and dancing – but sometimes they just sit and watch – like a conventional audience.

David Greig was the first Dramaturg for National Theatre of Scotland in 2005 and his plays have been translated and produced worldwide. They include The American Pilot (RSC), Yellow Moon, Dr. Korcak’s Example and Petr (TAG) and the award winning plays San Diego (EIF/Tron Theatre), Outlying Islands (Traverse Theatre) and Caledonia Dreaming (7:84). His work with Suspect Culture includes Timeless, Airport and One Way Street. Screenplays and television include At The End of The Sentence and The Darkest Hour.

Wils Wilson’s directing work for National Theatre of Scotland includes Gobbo – The Adventure of Gobbo and The Watchmaker devised and created with David Greig and Home Shetland created with Jackie Kay. Both productions won CATS Awards.

Annie Grace singer/instrumentalist/actor originally from Fort William was a member of the group Iron Horse and regularly performs with her own trio. She has recently appeared in Pinocchio (The Arches), Jacobite Country (Dogstar) and Peter Pan (National Theatre of Scotland).

The National Theatre of Scotland is supported by the Scottish Government. Since its launch in February 2006, the National Theatre of Scotland has been involved in creating 137 update productions in 125 update different locations. With no building of its own, the company takes theatre all over Scotland and beyond, working with existing and new venues and companies to create and tour theatre of the highest quality. It takes place in the great buildings of Scotland, but also in site-specific locations, airports and tower blocks, community halls and drill halls, ferries and forests. The company has performed to almost 600,000 people, across three continents. www.nationaltheatrescotland.com

Best Use of Music and Sound – Alasdair Macrae

In person: Tickets can also be booked at the Oran Mor bar