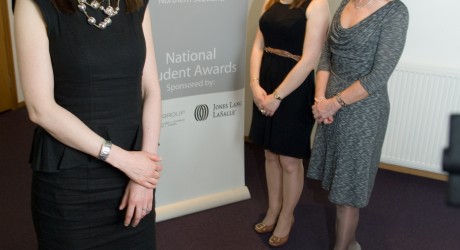 CATHERINE Thornhill has been elected chair of the Northern Scotland Branch of the Association of Women in Property (WiP) and succeeds Jacquie Forbes who saw an unprecedented rise in membership during her tenure.

Catherine is an associate with Ryden LLP in Aberdeen, and her vice-chair is planning consultant colleague, Natasha Douglas.

Together, they head up a new committee which comes up with fresh ideas to continue the revitalisation process started under Jacquie.

Catherine said: “The Association’s remit is wide. We seek to erase traditional career stereotypes at all levels, particularly in promoting female achievements in a traditionally male industry to inspire girls when they are making their standard grade and higher career choices.

“We mentor and develop women through their careers and work alongside those women who are on, or approaching, the board.”

They aim to do that through meetings, networking events and site visits which have previously included trips to the International School, Marischal College, The Mitherkirk Project, the IQ development in Justice Mill Lane and the new Queen Mother Library at Aberdeen University.

Most recently, they hosted an evening of chocolate tasting and truffle-making by local chocolatier, Jamie Hutcheon, of Cocoa Ooze Luxury Handmade chocolates, which was particularly well attended.

The women see their organisation as professional with a social element, and one which mixes professional development with site visits, talks, networking and mentoring.

The Association of Women in Property was set up 24 years ago by a female architect and a female surveyor who found themselves the only representatives of their gender at an event, initially as a networking platform for professional women in the property sector.

As the sector has grown and developed to encompass such jobs as facilities management, so has interest in joining.

Says a spokesperson: “Yet, women represent only 15 per cent of the property and construction industry workforce, a balance still to be redressed and the Association aims to do that.”

Added Catherine: “We see WiP as a way for women to have their own network which ties in with the mens’ networking systems. It gives young women a step on the ladder and their own forum for discussion. We hope it also gives young girls coming in to the industry a structure where they can come for advice.”

Jacquie recalls that when she trained as an architect, only one in ten of her fellow students were female.

Now there’s a more equal gender split among architecture students; however, there is still a significant fall out in the profession due to career breaks.

This is another area where WiP comes into its own since those on career breaks can still come along to meetings and trips to keep up with industry news and trends, and hear about job opportunities.

The local branch is also involved with the organisation’s National Student Awards which were established to celebrate the wealth of talent, enthusiasm and ambition coming into the industry through universities.

Interviews have taken place to select the local winner who will go forward to the national final. The lucky winner will be announced at the forthcoming awards evening on the 19th May.

In the coming few months, WiP hopes to raise the profile of the local branch, through a packed CPD and event schedule, the regional and national Student Awards scheme and speaking out on issues relevant to their membership.

Catherine concludes: “We’re here to provide support and break down negative stereotypes with a growing membership and a full schedule of well-attended events. I think we’re succeeding.”

Picture shows, from the left, Catherine, Natasha and Jacquie.