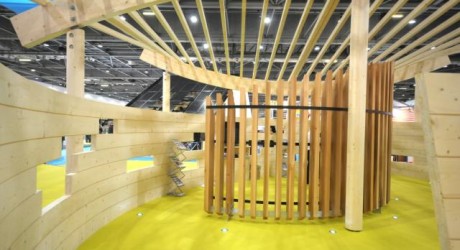 CORE Structures has started work on the first contract secured as a result of exhibiting at EcoBuild in London in March.

The work, worth £50,000, is for a porter’s lodge at a school within sight of historic York Minster.

These are becoming increasingly sought after for public buildings, churches, leisure centres, health centres, supermarkets and even in some special domestic situations.

Ecobuild is recognised as the world’s biggest event for sustainable design, construction and the built environment and the UK’s largest construction event of any kind and Core Structures was the only company from the North-east to take part in it.

“As a result we’ve had enquiries from the Isle of Wight to the Isle of Lewis,” said director, Hamish Morrison,

“We’ll be following up on those for a while but it was good to get the first project started even if getting supplies to the site down the narrow York streets is a bit of a challenge.”

Core Structures designed and installed their own stand, constructed from glulam which attracted a lot of interested and which they could have sold several times over.

They were also contracted to build the neighbouring Extreme Timber stand for Pasquill Timber Engineering, part of the Saint-Gobain group, a world leader in the design, production and distribution of materials for the construction market.

“That stand also attracted a lot of attention. The Saint-Gobain Group is part of the sourcing team for the Olympics so it’s possible the stand could end up in the Olympic village,” said Hamish. “There’s a lot of new interest in glulam and what it can be used to build.”

Now in its second year of trading and on track to double last year’s £600,000-worth of business, Core Structures has moved its HQ to a suite at Gordon House, Greenbank Road, Aberdeen and increased its staff to five with the appointment of Stephen Keegan, an estimator/surveyor with more than 20 years professional experience.

Nearer to home, Core Structures recently completed work on a new church in Banchory and is working on a conference centre, also in Banchory, as well as some very special private houses in the Highlands.

Pictures show Core’s own stand at EcoBuild and the one with the ‘genga wall’ which they created for Pasquill Timber Engineering.

Core Structures design, supply and erect fully-integrated building solutions using Glulam engineered structures by working closely with UK architects, engineers and building contractors to generate sustainable building concepts. Glulam is an industrial manufactured product used for load-bearing structures. It consists of at least three layers of dried softwood boards or board lamellas glued together with their fibres aligned parallel to each other.