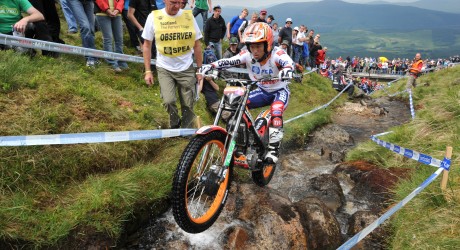 PREPARATIONS are well underway for the sixth round of the 2011 SPEA FIM Trial World Championship to be held at Nevis Range, Fort William in the Scottish Highlands over the weekend of Saturday 30 and Sunday 31 July.

Considered by many of the top riders as one of the best rounds of the 2010 season, the Grand Prix of Great Britain at Fort William will once again play host to sixty of the most accomplished, composed and skilful motorcycle trials riders from around the globe.

They will battle it out over a mixture of stunning natural and technical man made sections, with the added pressure of a set time limit for each section, for valuable points towards the 2011 SPEA FIM Trial World Championship World Pro (male only at Fort William), World Junior (male and female) and World Youth (male and female) titles.

Martin Lampkin said: “There’s no doubt that last year we created a winning formula – everybody involved commented on how well the event ran and were especially complimentary about the wide range of sections.

“With this in mind I am keen to make sure that none of last year’s magic is lost, but I am also aware people will want to see some new challenges for the world’s best riders.”

On a visit to Nevis Range event organisers, L+M Events, were greeted by a landscape that had substantially changed, in certain areas over the past ten months.

A harsh winter and heavy rainfall have contributed in shifting the local terrain, especially around the river sections out on the course.

“It’s incredible to see how the rocks have been moved since last year,” continued Lampkin.

“Obviously for us this is great news as spectators and riders alike will benefit from having fresh sections to navigate.”

It’s not only some of the natural sections which have been modified – Martin is also exploring the possibilities of creating a brand new section close to the paddock, in the Nevis Range car park, plus three new man made hazards.

The FIM rules have been modified since last year, and each rider now has 90 seconds to pass through each section rather than the sixty seconds that they had last year.

Despite this Lampkin is confident he can create a course that still pushes the riders to their absolute limits.

“Clearly the FIM rule changes will make a difference when it comes to building the sections, but I see it as a positive thing – the spectators get to watch the riders in the sections for longer and it gives me greater opportunity to make a more dynamic course,” concluded Martin.

The actual paddock area itself has undergone generous changes for this year with an increased event village and extra car parking spaces.

Substantial investment has also seen the creation of a state of the art café at the Nevis Range Mountain Resort with incredible views of the mountain – a facility that both teams and spectators will benefit from during the event.

Full information on the 2011 SPEA FIM Trial World Championship at Nevis Range, Fort William, including travel and accommodation, and to buy tickets go to http://www.ukworldtrial.com/ or call the event hotline on 0845 643 6756.