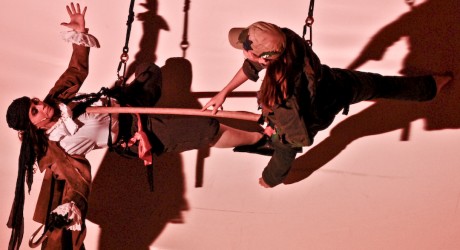 LEITH on the Fringe, the new dynamic, family focused, destination venue with the Leith and wider Edinburgh community at its heart have launched their Edinburgh Festival Fringe programme.

The full and diverse schedule of aerial shows, theatre, dance, music, cabaret, film, talks, art and workshops will run at Out Of The Blue Drill Hall, Dalmeny Street, from Wednesday 3 to Sunday 28 August (not Mondays).

The latest addition to the Edinburgh Festival Fringe venue line up; with its own hub – two performance spaces (a 190 seat main theatre and a 90 seat studio theatre), box office and cafe and bar, has been inspired by the work of the many artistic companies and individuals who call Leith home.

It will showcase an impressive line up of home grown and international talent, from as far afield as USA, Germany and Italy, in the heart of Leith, one of Edinburgh’s most diverse and vibrant districts, close to the city centre.

John Diamond, from Leith on the Fringe, said: “We are aiming to create a unique artistic identity that will promote Leith as a viable festival destination; to provide visitors and locals with a diverse programme of events and entertainment that will encourage them to spend more time here and benefit the community, local businesses and the arts in Leith”

As a result one of the highlights of the 2011 programme will be ANGELS Aerials (Germany) who are bringing their breathtaking acrobatic aerial adaptation of J.M. Barrie’s classic Peter Pan to Edinburgh.

The company will also be offering flying workshops directly after their performances.  Another aerial company coming to LOTF is The Paper Doll Militia (San Francisco).

One of the highlights of the venue’s strong theatre programme is Man To Man, an electrifying solo show about a woman who steals the identity of her late husband in order to hold on to his job during the Great Depression.

It is directed by John Paul McGroarty, former artistic director of the Leith Festival; and associate director of LOTF.

Other theatre highlights include:

ο    Tightlaced Theatre, an Edinburgh based New Writers company, will perform two shows. Winners Wear Crowns, written and directed by Jennifer McGregor, is a comic monolgue delving into the world of American beauty pageants, while The Lilypad is a family show, written by Robert Howat, which narrates the adventures of Tony, a neurotic frog as he strives to save his Kingdom from an evil goblin.

ο    Residents at Out of the Blue, Strange Town Theatre Company, bring After You’ve Gone… by Duncan Kidd. A stash of letters tells a family’s story through the tumultuous early decades of the 20th Century. From war to heartbreak, they reveal that life’s never been easy as a teenager.

ο    Untouchable Voices, an original work by actor Anna Procter and singer-songwriter Tabea Mangelsdorf, gives voice to the largely unheard stories of the Dalit people in Rajasthan, India, fusing a passion for music and theatre with a zeal for social justice.

ο    Donated to Theatre Found for this year’s Edinburgh Fringe, Peter Arnott’s play, The Inquisitor, calls into question interrogation, and the unravelling of self.

The venue’s flagship evening show is Live in Leith, an entertaining open mic night for anyone keen to showcase their hidden talent; from song writing skills, to performance poetry, to stand up comedy, to singing.

Be the first to see the next big celebrity name before they are ‘discovered’.

For three nights Bavarian musician, Vroni Holzmann, will open Live in Leith, taking a light-hearted look at the culture and traditions of Bavaria – from the art of beer drinking, to German-style dating. Audiences will have a chance to clap, yodel and whoop along to traditional Bavarian songs, all played on Vroni’s accordion.

At the other end of the musical scale Ang Li is an internationally acclaimed piano virtuoso whose performance credits and talents reach well beyond her years. Her youth, talent, personality and audience appeal, truly make her one of the world’s rising classical piano stars.

LOTF is delighted that she will perform three pieces as part of her ‘Liszt: Years of Pilgrimage’ international tour.

When it comes to cabaret The Roughhausers, a comedic performance troupe from Hollywood, CA, will amuse and delight their audiences when they stage their twisted take on vaudevillian sideshows that includes cheeky burlesque, bizarre magic, comedy, contortion, freak acts, the art of the con, audience participation, plenty of innuendo and improvisation.

Beyond, choreographed and performed by Grazia Capri, is a strong and compelling work based on intimacy, detachment and ‘living outside'; poetically inspired by a self portrait of Francesca Woodman (On being an angel).

The LOTF team aim to increase footfall to Leith during the Fringe, and throughout the year, promoting it as a place ‘where great things happen’, a destination in the heart of Edinburgh.

As a result the venue has been programmed in such a way as to dictate a morning, afternoon or evening well spent; encouraging audiences to make the short trip to Leith, arriving early or staying on in order to take advantage of the available workshops and performance packages, together with the drinks and food promotions on offer at local bars and restaurants.

With this in mind performance and craft workshops to suit all ages have been programmed at the venue throughout August:

ο    If you have always felt you could be the perfect life drawing model then the Girl in Suitcase performance workshop, from Spirited Bodies, will give you the opportunity to try life modelling in a safe and fun environment.

ο    From learning to fly like Peter Pan with ANGELS aerials to learning to sword fight like Captain Hook with Fencing Fun the kids (of all ages!) will be amused for hours. For the more skilled aerialist, The Paper Doll Militia will host a creative sequencing and aerial choreography workshop.

ο    For the Under 5’s Feet Foxes are offering dance, singing and movement workshops, while Dance Movement Psychotherapy Scotland will offer a drop in Dance Movement Therapy workshop.

ο    For a more hands on experience Leith-based designer, Helen Gallogly, is leading a wicker workshop, teaching you how to design and build your very own piece of Willow Sculpture!

On the event side of the programme LOTF have teamed up with Imaginearts to present Ragged Arts – an exhibition of work by Edinburgh based artists at St Margaret’s House, 151 London Rd EH7 6AE, in August.

Ragged Arts brings artists of different disciplines and backgrounds together so that they may showcase and sell their work collaboratively.

Working with The Ragged LOTF will host, Ragged Talks, a lunchtime excursion into the intellectual life and passions of Leith, Edinburgh and all those that call the city home.

Guest speakers will talk about the books they have written, the theories they have developed, the music they make, the philosophies they love, a subject or career they have invested in.

Live Film In Leith is a weekly programme of unique cinematic content presented by Pundigrion.

Though the full programme for LOTF at the 2011 Edinburgh Festival Fringe includes performances from a diverse range of artistic disciplines, the long term aim of the venue is to be best known as Edinburgh’s main hub for showcasing UK and international circus, aerial and street art of the highest quality; as well as the more diverse arts, physical theatre and dance disciplines.

It is also the ambition of LOTF to become an umbrella organisation that supports and promotes Leith as an affordable and exciting alternative destination during the Fringe and throughout the year.

The team have plans to organise performances, workshops and master classes at the venue all-year-round, to develop other venues in Leith into performance spaces; and to build an annual multi-faceted programme of cultural events throughout Leith.

For further information on the Leith On The Fringe programme for the 2011 Edinburgh Festival Fringe and to buy tickets go to http://www.leithonthefringe.com.