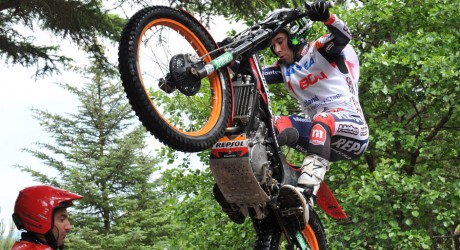 AFTRER a three-week interlude, the 2011 SPEA FIM Trial World Championship resumes pace as it lands in Fort William, Scotland for the sixth round of the series.

Situated on the west side of the country, Fort William has a long association with Trial, with the Scottish Six Days Trial taking place in and around the town each May for the last 100 years.

Despite this, the 24 year-old Spaniard will approach the event with caution after experiencing the full wrath of the demanding Highland sections at last year’s two-day British GP.

Initially showing great form by winning the first day’s competition, Bou was less effective in the Scottish hazards on the second day and he was forced to settle for third.

Compatriot, Adam Raga – Gas Gas, strengthened his second place position in the championship by recording a valuable runners-up spot at the Italian GP, something he will aim to repeat this weekend.

In stark comparison, Albert Cabestany – Sherco, endured a frustrating time in Italy, which saw him record his worst result of the season, eventually finishing fifth.

After crashing heavily and sustaining an ankle injury Cabestany, who is currently third in the series, will be keen to get his campaign back on track in Scotland.

Japan’s Takahisa Fujinami – Repsol Montesa currently sits fourth in the championship and after recording a podium finish in Italy the 31 year-old veteran campaigner trails Cabestany by only two points.

After going 3-1 at the UK event last year, Fujinami will travel to Fort William looking to capitalise on Cabestany’s injury and move up the standings.

Despite producing a determined performance at the first day of the French GP, which saw him finish second, Jeroni Fajardo – Ossa has experienced a frustrating season so far.

Lying in fifth place some eleven points adrift of Fujinami, Fajardo must find his form amongst the Highland hazards if he is to fight for a top four finish in the championship.

Sixth-placed James Dabill – Beta will look to use home support to his advantage as he continues his campaign to break into the top five in the general standings.

With only eight points separating these four young protagonists there is still much to fight for.

In the Junior category Spain’s Alfredo Gomez – Montesa continues to sit at the top of the table, currently holding a healthy 17-point lead over countryman Francesc Moret – Montesa.

Despite this, Gomez has slipped from the top step of the rostrum at the previous two rounds of the series with Alexandre Ferrer – Sherco taking top honours on both occasions.

This is something that Alfredo will aim to resolve in Scotland.

In the competitive Youth class, Jack Sheppard – Beta will arrive at his home GP with a slender eight-point advantage over second placed Cedric Tempier – Sherco.

Continuing to struggle with a longstanding wrist injury, Sheppard needs to find his winning form if he is to keep Tempier at bay.

Whilst advance tickets have now closed, tickets will be available on the gate throughout Saturday and Sunday.

Ticket prices are as follows:

For further information please visit www.ukworldtrial.com or call the event hotline on 0845 643 6756.

The UK leg of the 2011 SPEA FIM Trial World Championship

The UK leg of the 2011 SPEA FIM Trial World Championship, the 36th edition of the biggest, the most important and the best motorcycle trial competition series on the international calendar, will be staged at The Nevis Range, Fort William, Lochaber – the Outdoor Capital of the UK – on Saturday 30 and Sunday 31 July 2011

The 2010 and 2011 SPEA FIM Trial World Championship and Trial Des Nations 2012 will be run on behalf of the Federation Internationale de Motocyclisme (FIM) which is the world governing body of motorcycle sport. The Auto Cycle Union (ACU), the British motorcycle federation, has sanctioned these events to be run within its territory.