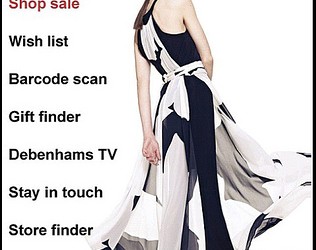 At the awards ceremony held in London on June 14, over 600 of the UK’s top retailers and retail technology providers gathered to celebrate the retail successes and best of breed retail technology solutions of the last twelve months. Judged by a panel of industry experts, the awards recognised the UK retail industry leaders which have demonstrated both creativity and technical innovation in their bid to enhance both service offering and shopping experience.

Director of Sales and Business Development at NN4M, Lorraine Howard, is delighted at the recent success of the Debenhams iPhone app.

“Debenhams’ iPhone app being named Mobile Solution of the Year is absolutely fantastic news as the competition in the category was of such a high standard.

“We work tirelessly with the team at Debenhams to develop an app which consistently delivers according to each of their specifications. We’re very proud of the app – it has been so successful with regard to downloads, consumer activity and the number of transactions it has processed since its launch last year.

“By all accounts, Debenhams’ customers are really enjoying the shopping experience it offers and we’re thrilled that it has gained both consumer and now industry recognition as a leading example of mobile retail solutions.

“We have thoroughly enjoyed the challenge set by Debenhams which has pushed our talented team to produce something which we believe is an exceptional product. We’re dedicated to maintaining this success and are encouraged by the news of the Debenhams iPhone app being named Mobile Solution of the Year.”

A spokesperson said: “Winning this award has strengthened the position of the Debenhams fully-transactional iPhone app at the top of the m-commerce charts. Launched in October 2010, the Debenhams iPhone app accounted for sales of nearly £1million for the High Street retailer within five months of its launch.

“The highly-respected judging panel acknowledged the seamless blend of technical innovation and a rich, immersive shopping experience which the app offers its users. Particular features include the ‘My Debenhams’ personalisation options, social media integration and a barcode scanner which acts as a virtual in store assistant to view further product details and reviews, to buy items from the phone or to save items to a wish or gift lists.