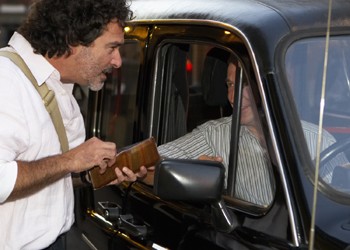 INEBRIATED passengers are making taxi drivers working lives a misery and threatening their livelihoods, a new study has found.

Begins a spokesperson: “A gun to the head, a fist through the partition, abusive teenage girls and elderly fare dodgers were among the incidents reported by Scottish cabbies.”

Moira Weir, an MSc Transport, Planning and Engineering student at Edinburgh Napier University, interviewed 75 taxi drivers from across the country about their experiences behind the wheel.*

The spokesperson added: “Over 70 per cent surveyed reported feeling unsafe at work and a further 88 per cent said that had been verbally or physically abused by a passenger under the influence of alcohol.

“One Glasgow taxi driver recalled feeling ‘cold metal’ on his neck. ‘The man had put a gun through the hole in the partition. It was all over a four pound fee.’

“Another told how an inebriated male passenger ‘punched his way through the partition’.

“Another Glasgow driver said: ‘It’s gangs of women that bother me, three or four women all together. I always make sure that if one of them passes out, her friends sort her out.’

“A Dundee cabbie added: ‘I have learnt how to handle grown men when they’ve had one too many but 15 year-old girls is a different matter. I have no idea what to do with them if they become abusive. The sooner I can drop them off to their parents the better.'”

The spokesperson added: “Fare dodging was a further problem. Almost every cab driver (98 per cent) surveyed had experienced fare dodging and of those, 45 per cent claimed passengers skip payment on a regular basis**.

“And the problem was not confined to a particular age group. An Edinburgh driver remembered picking up an elderly lady who left her bus pass as security. ‘She got out and I never saw her again,’ he said.

“A passenger causing damage to their cabs was one of the major concerns among drivers.

“Another Edinburgh cabbie recalled: ‘There was one guy who refused to pay the fare. On his way out he booted in the door. That is really bad as it means the taxi has to come off the road and I can’t make a living.’

“Moira’s interest in the working conditions of those within the industry was sparked by a relative who works as a driver.”

She said: “Taxi drivers are the white knights of the city and play a vital role in the night time economy, but the vast majority of those I spoke to said that they felt most vulnerable in the evening or at night.

“I found it shocking to hear how frequently taxi drivers have to deal with threatening behaviour or fare dodging which directly affects their work and ability to make a living. No-one should have to put up with that kind of behaviour at work.”

“These types of behaviour will not be tolerated and as such, we are working with Edinburgh City Council’s Licensing Department to explore the possibility of installing CCTV across the fleet.

“All workers deserve to feel safe at work. We believe that installing CCTV in our taxis will offer a practical option to ensuring our drivers safety.”

** Regular basis refers to either weekly or monthly.