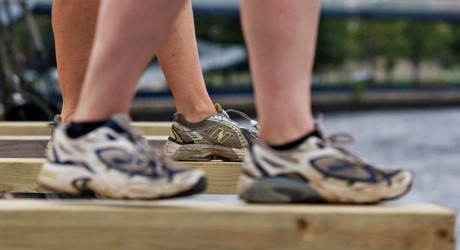 YOU are invited to send a photographer / reporter / camera crew to the Glasgow Riverside Museum, 100 Pointhouse Place, Glasgow G3 8RS on Sunday 21 August 2011 at 13:30 onwards for the new Glasgow Riverside Rat Race, an urban running event with challenges along the River Clyde.

Up to 1,000 runners will walk the plank of the Tall Ship Glenlee, kayak on the Clyde, tackle an assault course under the Finnieston Crane, and scale an inflatable hurdle, as they take part in the hotly anticipated Glasgow Riverside Rat Race.

The new Glasgow Riverside Rat Race is a fun and achievable 10km running (or walking) way-marked journey along the banks of the Clyde, interspersed with adventure activities, obstacles and challenges based alongside, near or in the river; and taking in some of the city’s many stunning and well known riverside landmarks. Competitors will experience the Clyde and some of its most iconic landmarks in some very unusual and interesting ways.

For the Glasgow Riverside Rat Race, the River Clyde will be used in an innovative and creative way, something that the investment at Riverside has greatly encouraged. This adventurous race will allow people to see the river in a new and exciting light – as an asset to be enjoyed, explored, and celebrated.

Rat Race Adventure Sports is presenting the Glasgow Riverside Rat Race with the city of Glasgow as a flagship event among other launch and seasonal events to coincide with the opening year of the new Zaha Hadid-designed Riverside Museum.

For more information on the Glasgow Riverside Rat Race: http://www.ratraceadventure.com/glasgow/

For a plan of the route please go to: http://www.ratraceadventure.com/glasgow/course.html

Up to 1,000 runners taking part will be split into 5 or 6 waves / groups starting at approximately 20 minute intervals.

Runners preparing themselves for the race

An organised warm-up session with lots of runners exercising

Start and finish – The Riverside Museum:

Runners running through the start and finish line with the spectacular Riverside Museum in the background.

Running under Kingston Bridge NEAR ‘The Quay’

Below Mint Hotel, between hotel and bridge runners will be running along the narrow stone stepped walkways on the edge of the river.

Mint Hotel – Runners running past the hotel with guests eating and drinking outside looking on.

Finnieston Crane – Assault Course at the base of / underneath the crane. This includes a low level wire and rope traverse and a scramble net

Runners running past the SECC’s ‘Armadillo’

Runners running through ‘Smartie Tube’, the red and glass bridge between SECC and station.

Final Obstacle – Slippery Climb – Runners have to run up a very slippery and steep sloped construction.