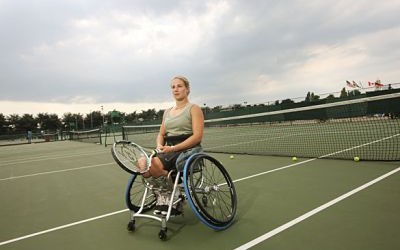 Lucy, 31, from Hampshire, is Britain’s number one ranked women’s wheelchair tennis player and tenth-ranked in the world.

She received the illustrious Vitalise Woman of Achievement award in recognition of her inspirational achievements in the world of disabled sport, having overcome being paralysed from the chest down following a motorbike accident in 2001.

Lucy’s partner in wheelchair doubles tennis is local professional Jordanne Whiley, from Halesowen, with whom Lucy is ranked tenth in the world. Lucy follows in the footsteps of previous Women of Achievement and Courage Award winners, including Katie Piper, whose personal story, My Beautiful Face, inspired millions, and disabled yachtswoman, Hilary Lister, who became the first-ever quadriplegic person to sail solo across the English Channel.

The 29th annual Vitalise Women of the Year luncheon and awards ceremony was presented by Arti Halai, formerly of ITV’s Central News, and took place at the Hilton Birmingham Metropole Hotel, NEC on 14 October 2011.

Over 400 high-achieving women attended the ceremony, which also featured a dance display by stars of South Africa’s version of TV’s Strictly Come Dancing, a luxury bazaar and live music.

Linda Duberley, Vitalise’s director of Fundraising and Communication, said: “Congratulations to Lucy on her award. At Vitalise we want to enrich the lives of disabled people by helping them achieve their personal goals, and Lucy is a fantastic example of that spirit.

“I’d also like to thank the thousands of women who have supported this event over the years. Their generosity has helped us to continue providing life-changing opportunities for thousands of disabled people like Lucy each year.”

Pauline Edden, board director of the Vitalise Woman of the Year Awards, said: “Lucy really stood out from all the candidates for her incredible achievements over the past year. Women face many obstacles in their struggle to excel, but the barriers Lucy has had to overcome to become Britain’s best wheelchair tennis player are a lesson to us all. She has proved that if we never give up pursuing our dreams, we can achieve anything.”

The annual Awards are in support of Vitalise, a national charity providing essential respite breaks for disabled people and carers. Proceeds from the event were donated directly to the charity.

Over the previous 28 years, the awards have raised around £500,000 for Vitalise.