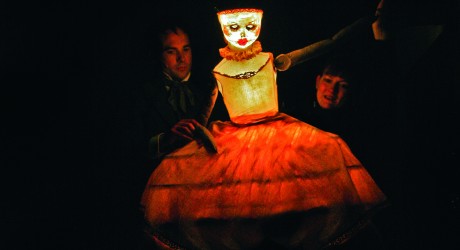 THE National Theatre of Scotland is delighted to offer the Company’s first festive offering, a new production of A Christmas Carol by Charles Dickens, adapted, directed and designed by Graham McLaren.

The production will be presented in an intimate and specially crafted performance space at Film City, Govan Town Hall, Glasgow, from Wednesday 30 November to Saturday 31 December, 2011, with a press performance on Saturday 3 December at 7.30pm.

A NEW PRODUCTION OF A CHRISTMAS CAROL

Puppets designed and made by Gavin Glover

Scrooge will be played by Benny Young and he is joined by four actors and puppeteers; Ben Thompson, Stephen Clyde, Josh Elwell and Beth Marshall.

Originally penned in 1843 as a novella, A Christmas Carol was an instant success and Dicken’s redemptive tale of Scrooge, Jacob Marley and the ghosts of Christmas’ Past, Present and Future, has long become an enduring Christmas favourite.

The National Theatre of Scotland’s production will bring Dicken’s classic Christmas fable to life for contemporary audiences with sinister life-size puppets and live music, played out in an unique setting.

This spooky and original reimagining is recommended for everyone aged eight-plus.

Graham McLaren is an associate director at the National Theatre of Scotland.

His acclaimed production of Men Should Weep enjoyed a sell-out run at the Citizens Theatre in September and is touring the country until the end of November 2011.

He is a Glasgow-based theatre artist who has previously been artistic director of Theatre Babel, which he founded and artistic/associate director of Perth Theatre.

He is currently associate artist at Necessary Angel, a Toronto-based Theatre Company where his new work, Andromach, premiered at the Luminato Festival in June 2011.

Gavin Glover has previously worked with the National Theatre of Scotland on Peter Pan.

Gavin is director of Potato Room productions, a puppet company for grown-ups.

Their show, Flogging a Dead Horse is currently on  tour.

He was a founder member of FaultyOptic: Theatre of Animation and productions for the company include: Dead Wedding (Manchester International Festival), Horsehead, Licked (with Opera North), Soiled, Snuffhouse Dustlouse, Tunnelvision and Bubbly Beds.

Benny Young takes on the role of Scrooge. He is currently in the National Theatre of Scotland/Royal Lyceum Theatre, Edinburgh’s, production of 27, Previous work for the National Theatre of Scotland includes The Wheel (The Traverse at the Edinburgh Festival Fringe); Be Near Me (with Donmar) and Six Characters in Search of an Author (with Royal Lyceum, Edinburgh/Citizens, Glasgow).

Other theatre credits include The Grapes of Wrath (Chichester); The Tobacco Merchant’s Lawyer (Tron/Traverse); Six Acts of Love; The Drawer Boy (Tron); Night Time (Traverse); Hughie (Arches); The Crucible; A View from the Bridge; Hobson’s Choice (The Touring Consortium) and The Iceman Cometh (Old Vic).

Television and film work includes Scottish Killers; Waking The Dead: Sins of The Father; Spooks; Talk to Me; Taggart; Coronation Street; Boon; Playing the Field; The Funny Man; The Bill; Between The Lines; Doctor Finlay; Chariots of Fire; Out of Africa and White Nights.

On the day sales: Tickets will be available to purchase (cash only) from Film City from half an hour before the performance.

No performances on Mondays /Christmas Day/Boxing Day or 27 December.

1. The National Theatre of Scotland is supported by the Scottish Government.  Since its launch in February 2006, the National Theatre of Scotland has been involved in creating over 137 productions in 125 different locations. With no building of its own, the company takes theatre all over Scotland and beyond, working with existing and new venues and companies to create and tour theatre of the highest quality. It takes place in the great buildings of Scotland, but also in site-specific locations, airports and tower blocks, community halls and drill halls, ferries and forests. The company has performed to almost 600,000 people, across three continents.